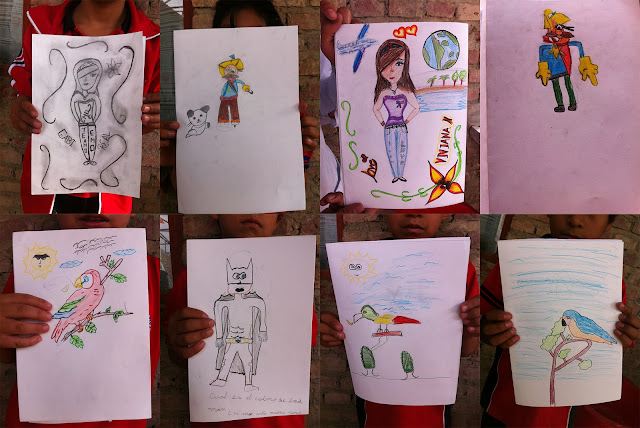 Drawing characters with the Tuesday afternoon group at CAICC.

After a lot of meetings, chat and planing, this has been my first week of a full-on workshop schedule:
1. CAICC on Tuesday afternoons and Friday mornings
2. Infante on Wednesday afternoons
3. Manuel E. Gandarillas on Thursday mornings
with studio time for my own project plus workshop prep and editing Mondays and the other four half days.

My flatmate Kory introduced me to the staff at Centro de Apoyo Integral Carcelario y Comunitario (CAICC) last week and this week we ran our first two workshops at the centre along with volunteer Flori, introducing storytelling through characters, storyboards and animation.

CAICC works primarily with children and adolescents whose parents are in jail and also with those who have been abandoned by parents migrating for better work opportunities.  Many children whose parents are incarerated live in the jails with their parents, so CAICC has a bus service which picks them up and takes them to school and to CAICC each weekday then drops them off at the end of the day.  CAICC has a day care centre for 1 to 6 year olds and the APRE school where we are working, which is a day centre for school-aged children and adolescents.  As in Brazil children in Bolivia go to school either in the morning or the afternoon so come to the centre for the other half of the day.  We are working with children of around 10 to 15 on Tuesday afternoons and 12 to 18 on the Friday mornings.

With both groups we brainstormed first about stories and here are some of the kids answers:
1. What are stories?  Fictional or real accounts of events with a beginning middle and end.
2. Where do we come across them? In books, films, schools, friends, family, ourselves, comics, internet...
3. What kind of stories are there? Romance, comedy, history, documentary, biography, horror, sci-fi, fantasy, adventure, terror
4. Why do we like them? They're entertaining, distracting, informative, fun, make us laugh, cry or smile! 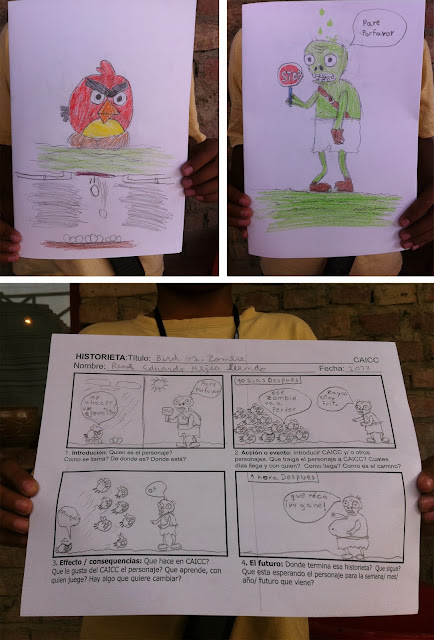 René drew Bird who was born in Chile and lives on an old farm, studied how to lay eggs and doesn't like any sport and a zombie called Pedro who was born in a hotel and lives in the street, plays football and likes cereal.
Storyboard Panel 1: [Bird, with many eggs ready to hatch, thinking in killing his enemy Pedro] "I am going to make an army", "Stop please" [holding up a stop sign] / Panel 2: '10 days later [lots of mini-Birds have hatched] "This zombie is going to stop" [Pedro is worried] "Oh no, I'm fried" / Panel 3: [Bird commands his army of mini birds] "Attack" [Pedro worried] "uh-oh" / Panel 4: 1 hour later [no birds visible and Pedro has a hugely extended stomach] "Tasty! I won!" 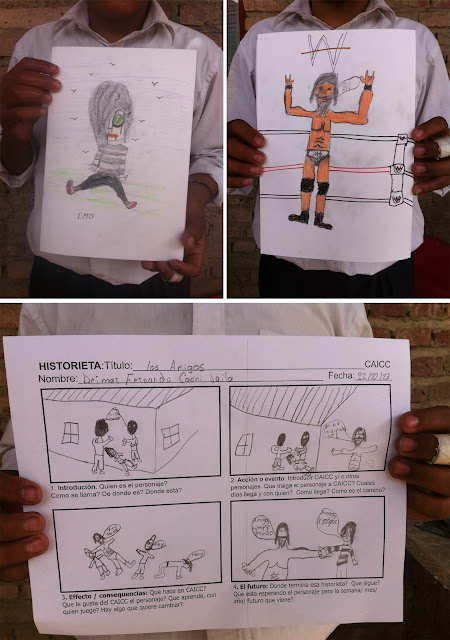 Deimar drew Emo and Daniel Brayan.  Emo is from a sad world, was born in Bolivia and lives on earth, his special power is not feeling pain or love . Daniel Brayan is from Mexico where he lives with his girlfriend Jhoana and speaks English, he likes doves for their love.  Both like eating salad and hope to live in a world of peace and love.
Storyboard Panel 1: Emo is attacked by two bullies. / Panel 2: Daniel comes to help out. / Panel 3: Daniel fights the two attackers off. / Panel 4: Emo and Daniel brome friends, both saying "Friends forever" 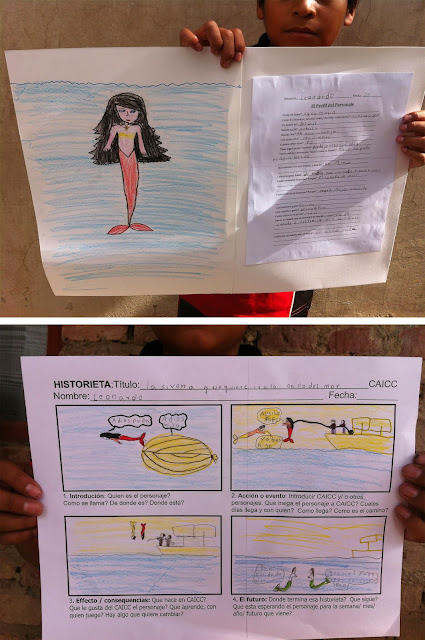 Leonardo drew Agua Maria, a mermaid who is 15 years old and was born in Australia and lives in a clam with her father, she like to eat fish and swim.
Storyboard panel 1: "Bye dad" "Bye daughter" [Agua Maria swims off to explore] / Panel 2: [Agua Maria is caught by 2 men on a fishing boat] "Help dad!" "I'm coming daughter!" / Panel 3: [the father manages to rescue the Agua Maria] / Panel 4: [father and daughter talking under water] "Take care daughter" "Thanks for saving me Dad"

3. Infante is a woman's centre which supports victims of physical, sexual or emotional abuse.  Infante staff offer counselling and therapeutic workshops including theatre, dance and combat.  The centre also acts as a shelter and at the moment five teenage girls are living there, who we are going to run art workshops with on Wednesday afternoons.  I was introduced to the director Maria by Emma Romano, (the ICYE volunteer I bumped into in the queue for the plane at Heathrow) and we started this Wednesday with an (unexpectedly short) introduction to storytelling through colour and symbol.  Referencing Bolivian weavings as I've been doing with my own work, we asked the girls to choose their favourite colours to draw with and think about what they mean for them. 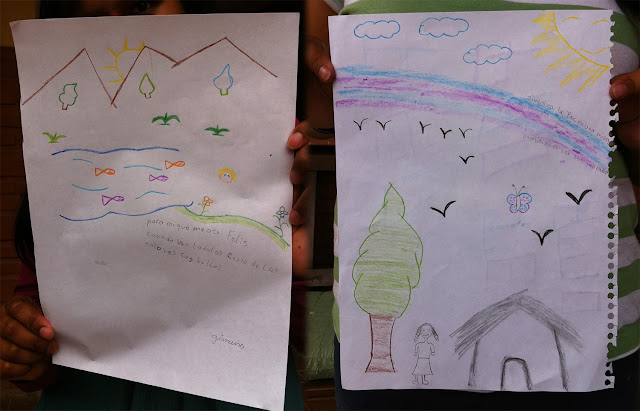 (left) Jimena: "For me it makes me happy when I see the mountain, all the colours are beautiful"
(right) [blue] Symbolises peace in oneself
[purple]symbolises to be in love

3. Manuel E. Gandarillas Rehabilitation Centre for the Blind is a day centre and residential home working with a range of ages from primary school aged children to older adults who are visually impaired.  The centre works on a one-to-one basis, providing support for clients to enable them live more independently, for example using guide sticks and reading and writing in Braille as well as providing home-work support, physical activities, craft workshops and music sessions.

I'm going in now once a week on a Thursday 8am - 12noon working alongside Profe Maria in her Braille-based classes.  At the moment she is teaching me how to write in Braille and I am copying some texts out for her students.  I am hoping in time we will be able to do some Braille-based art projects too, following a similar storyboard, character design format as at CAICC and Infante.

'El amigo' (The friend) written out in Braille during my second session of working alongside Profe Maria at Manuel E. Gandarillas where I'm currently copying out a book of short stories and sentences designed to teach a new-learner how to read Braille. 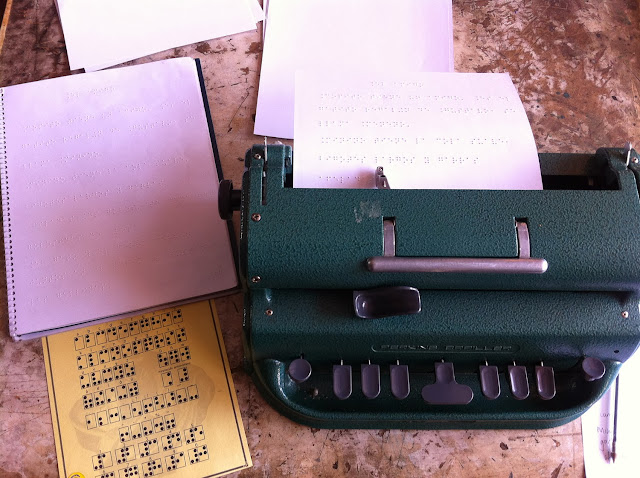 Spanish Braille is built from six dots - variations of the pattern of the dot mean that letters, numbers and punctuation marks are coded individually. My first week at Manuel E. Gandarillas I was writting using a plastic 'template' that you clip a sheet of paper into then use a metal spike to code the letters dot-by-dot.  This week I was using this type-writer. Each letter is typed with one hit of the keys.  The central key is the space bar, and points 1, 2, 3 count out from centre to left and 4, 5, 6 from centre to right.
Posted by Kim Alexander at 19:15