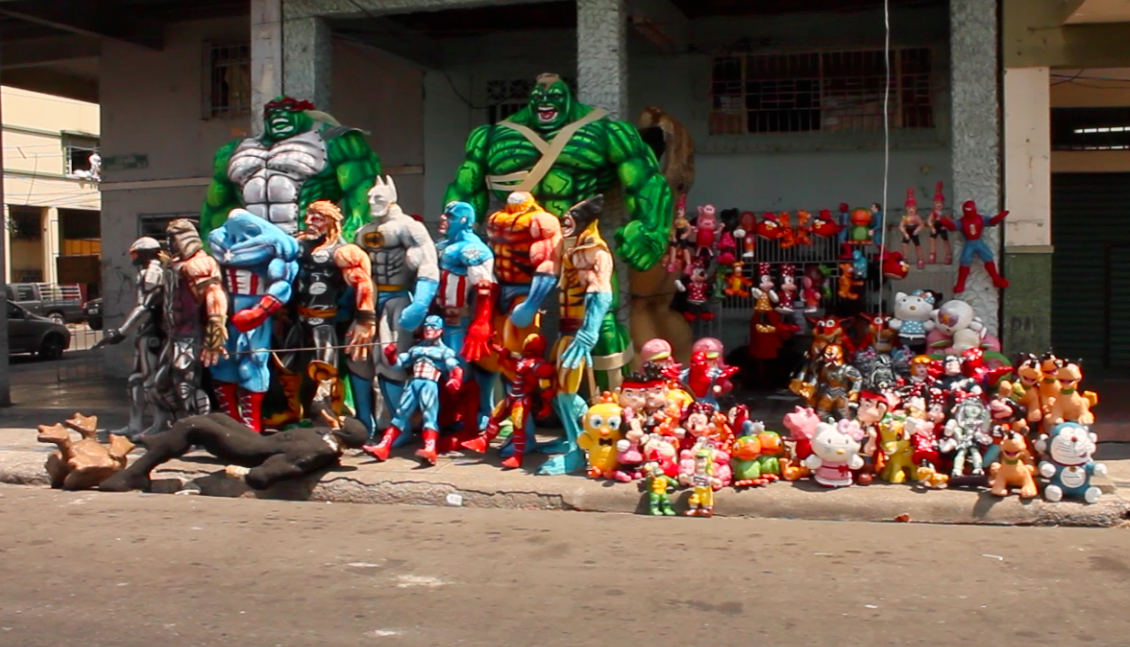 Our last Art Club project "Our Imaginary Friends" directly referenced the Ecuadorian tradition of the "Años Viejos" (Old Years), otherwise known as 'monigotes' (rag dolls), by creating very simplified scaled-down versions of the figures with our JUCONI kids.  The tradition goes that the figures are burned by families and communities to symbolise the letting go of the previous year and its events and welcoming in the new year, fresh and positive.

Here are some of the impressive examples of 'años viejos' from Guayaquil this year.  In the photo above, the 'monigotes' made in commercially in huge volumes on the street 6 de Marzo and elsewhere from around September onwards into December.  The figures we saw were mostly based on recognised cartoon characters, superheroes and tv, film and sports personalities.  They say politicians are also made, but Emily and I didn't spot any of these.

Elsewhere in Guayaquil, groups come together in the neighbourhoods and make enormous 'monigotes', some over 9 metres high, higher than the houses and electric cables at times.  And all made from cardboard, tonnes of newspaper and paint (the following photos were taken in mid December): 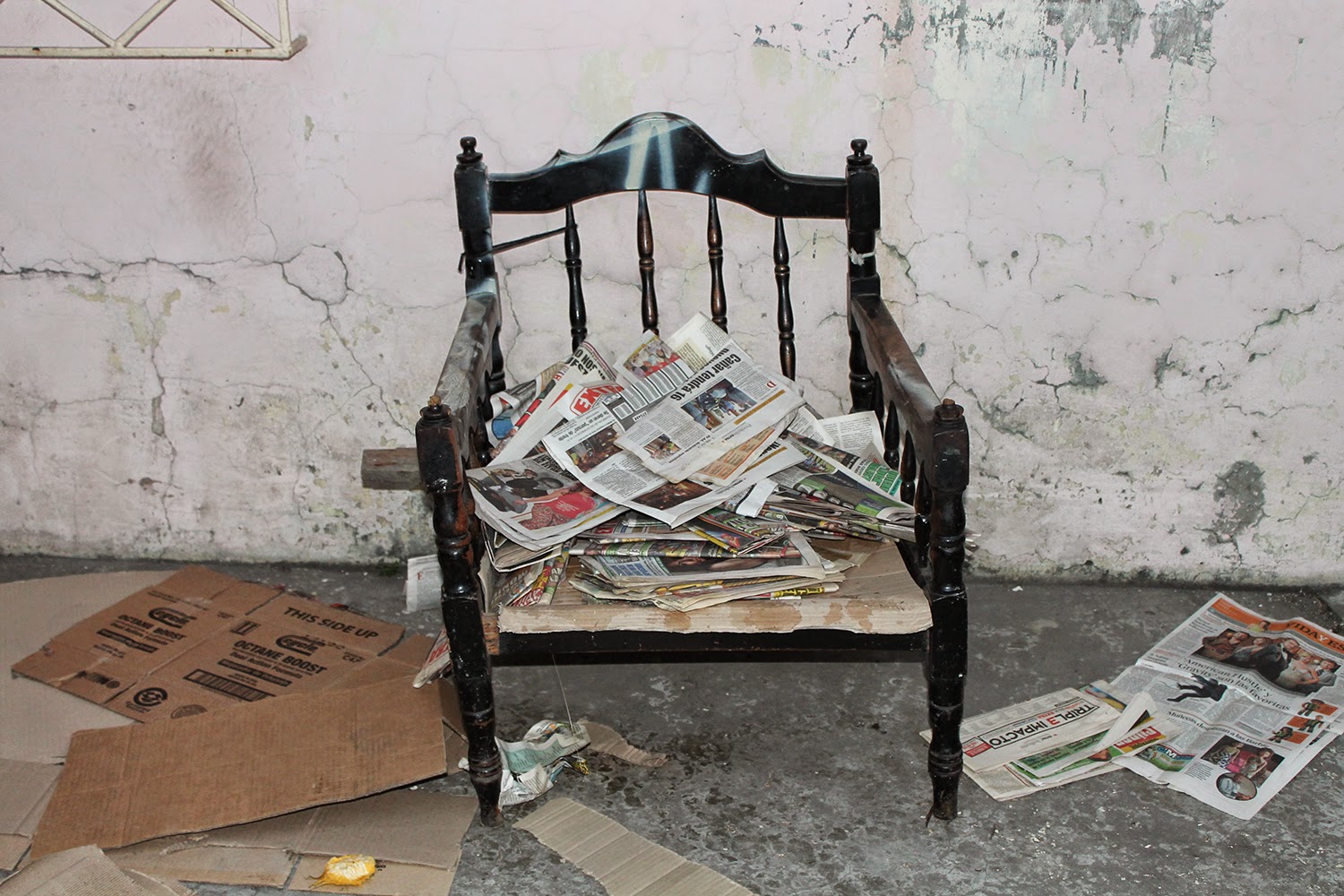 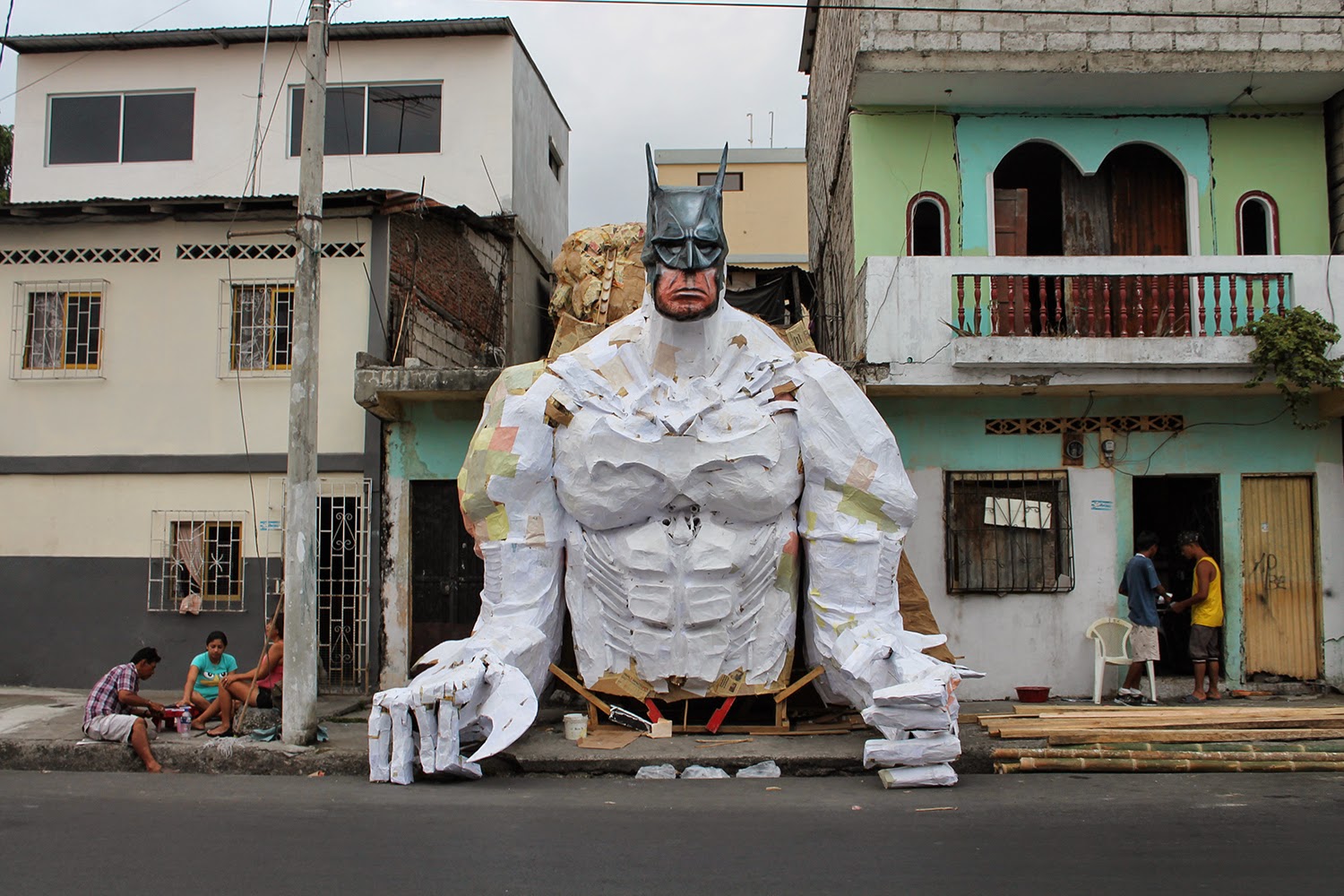 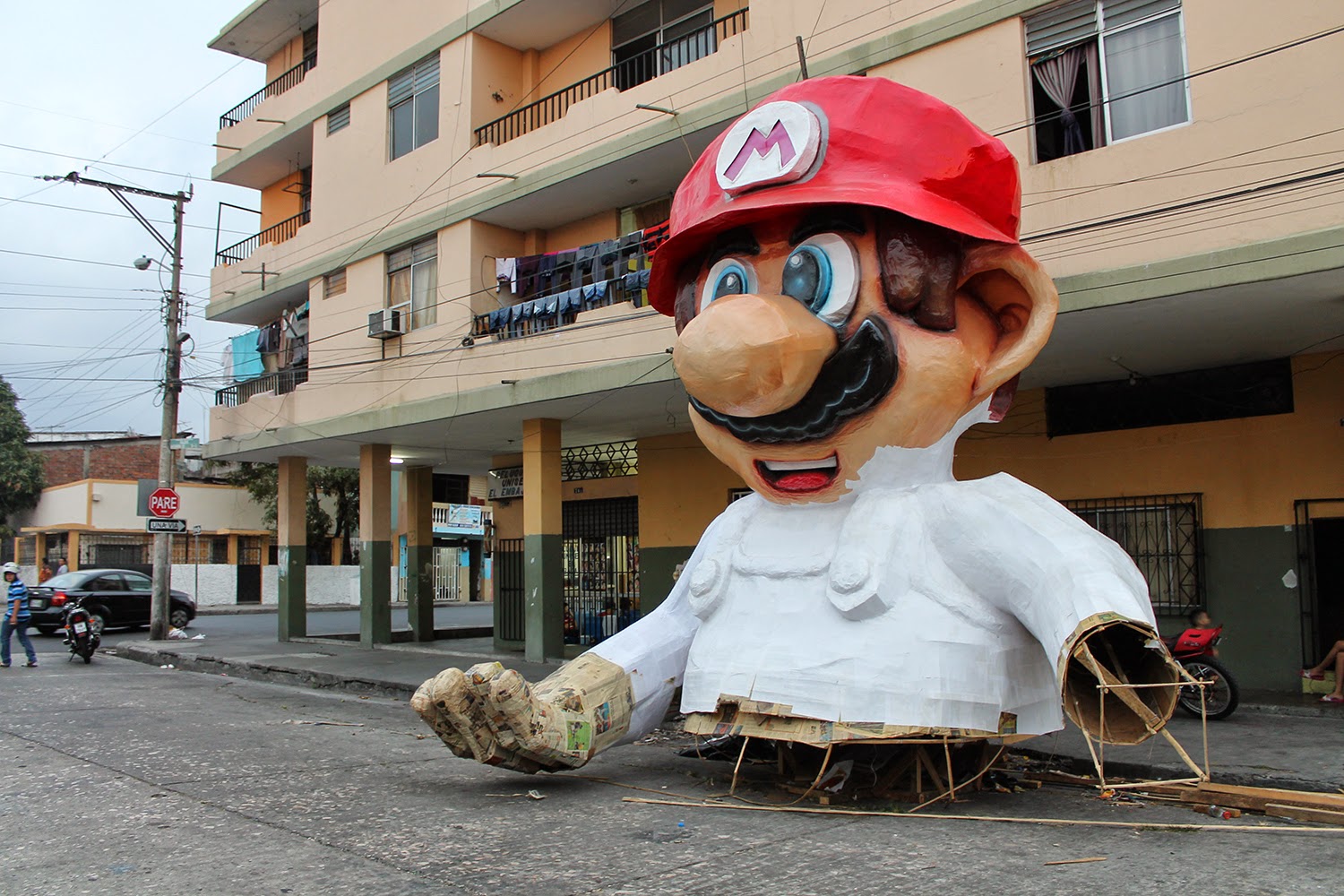 'El Chavo del Ocho' is a Mexian tv personailty popular internationally.  The actor Roberto Gómez Bolaños died earlier this year and this giant "Año Viejo" was made here in Guayaquil to welcome in the new year.  The first image is of the figure in mid-december, and the following from this past Saturday, 10th January, when Emily, Maria José, Tyrone and I went to see the ritual burning. In actual fact we never saw him burning, because the hour was put back and back in a typiclaly Ecuadorian manner, perhaps mostly because all of the food and drinks stalls surrounding him were doing  roaring trade. 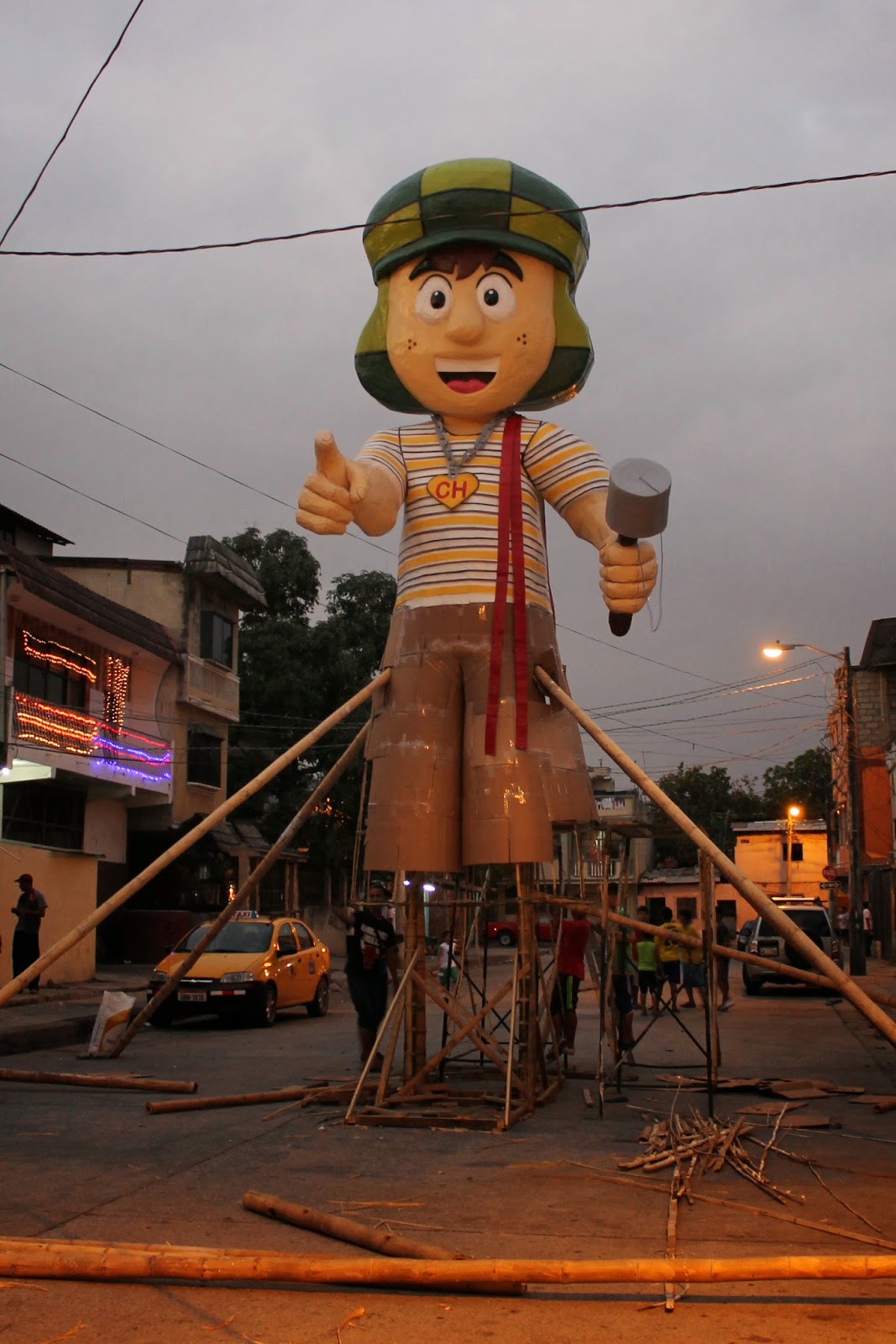 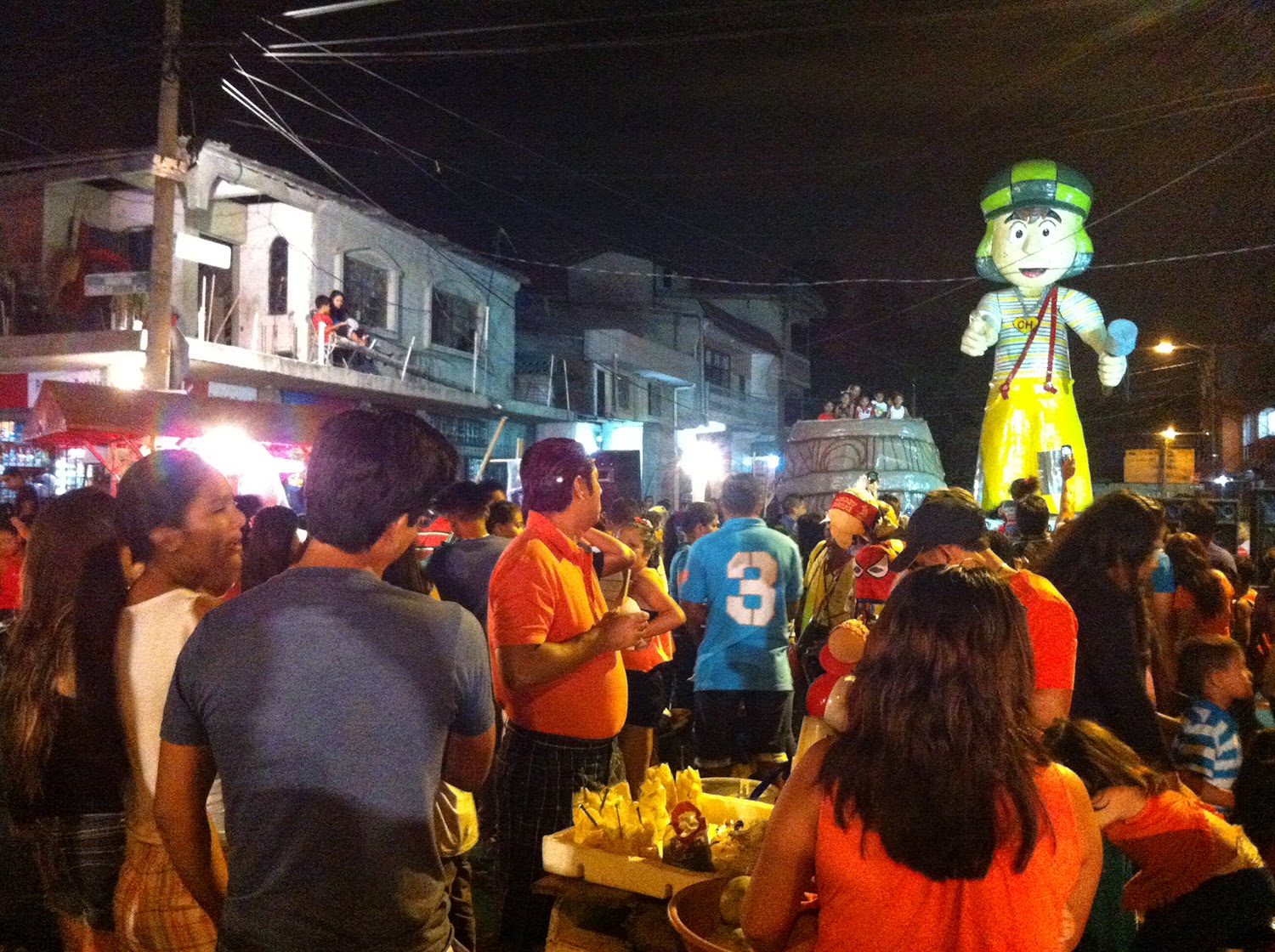 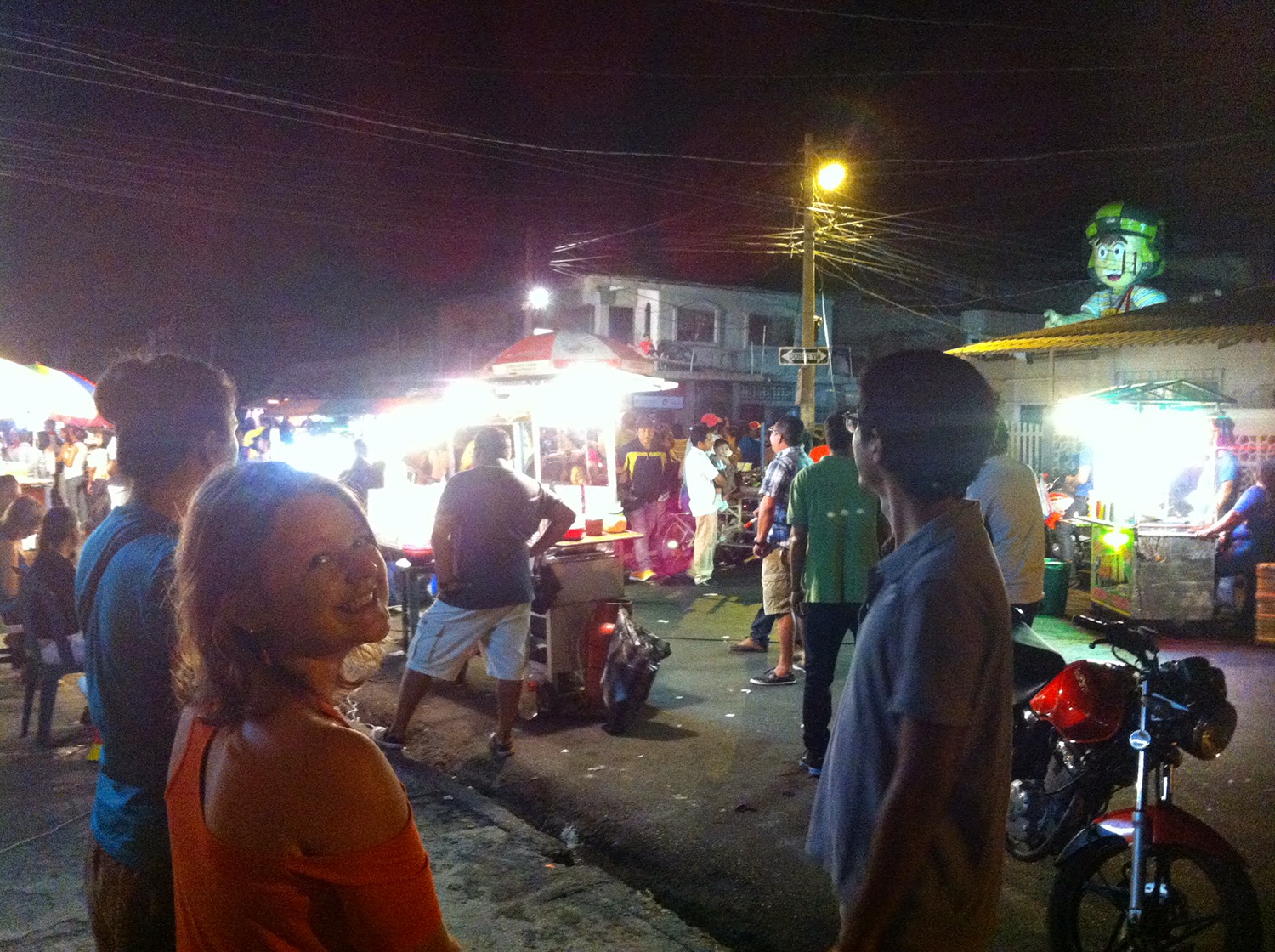 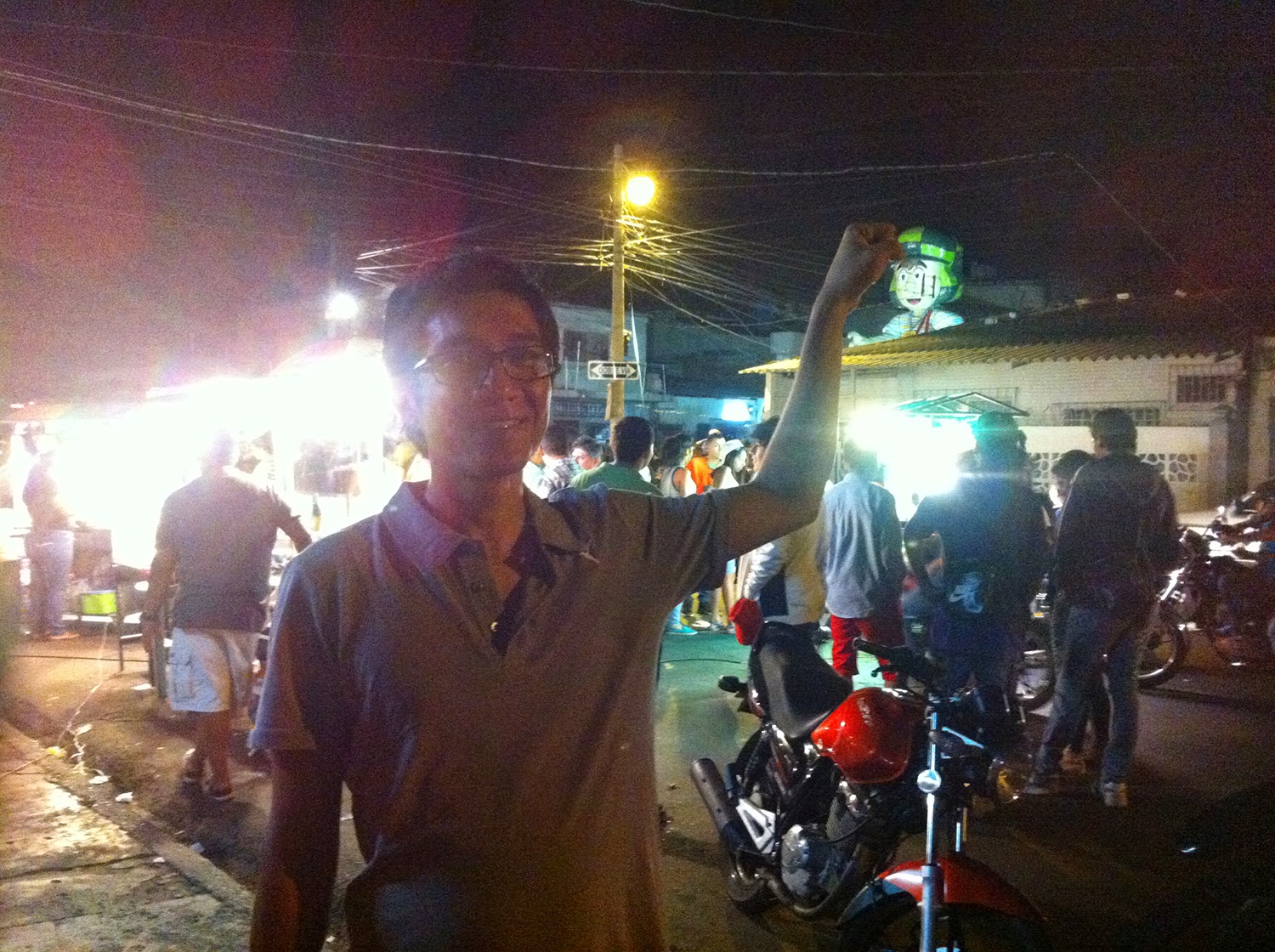 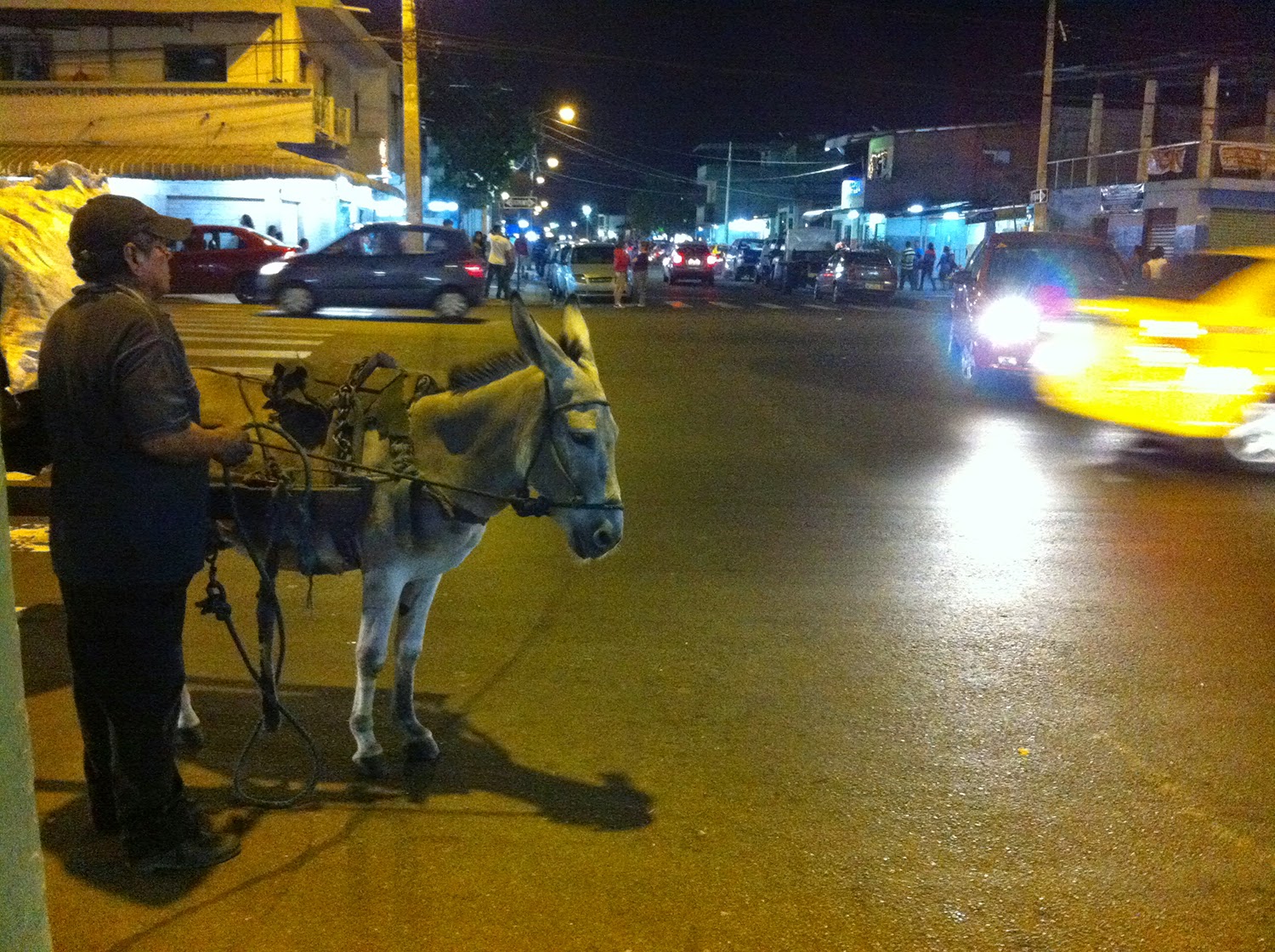 The Scooby Doos, one of Tyrone's favourites, were already almost finished in mid December (first photo).  This Saturday just gone we passed by a few times to see the finished figures and on our last turn they had already burnt to only a small pile: 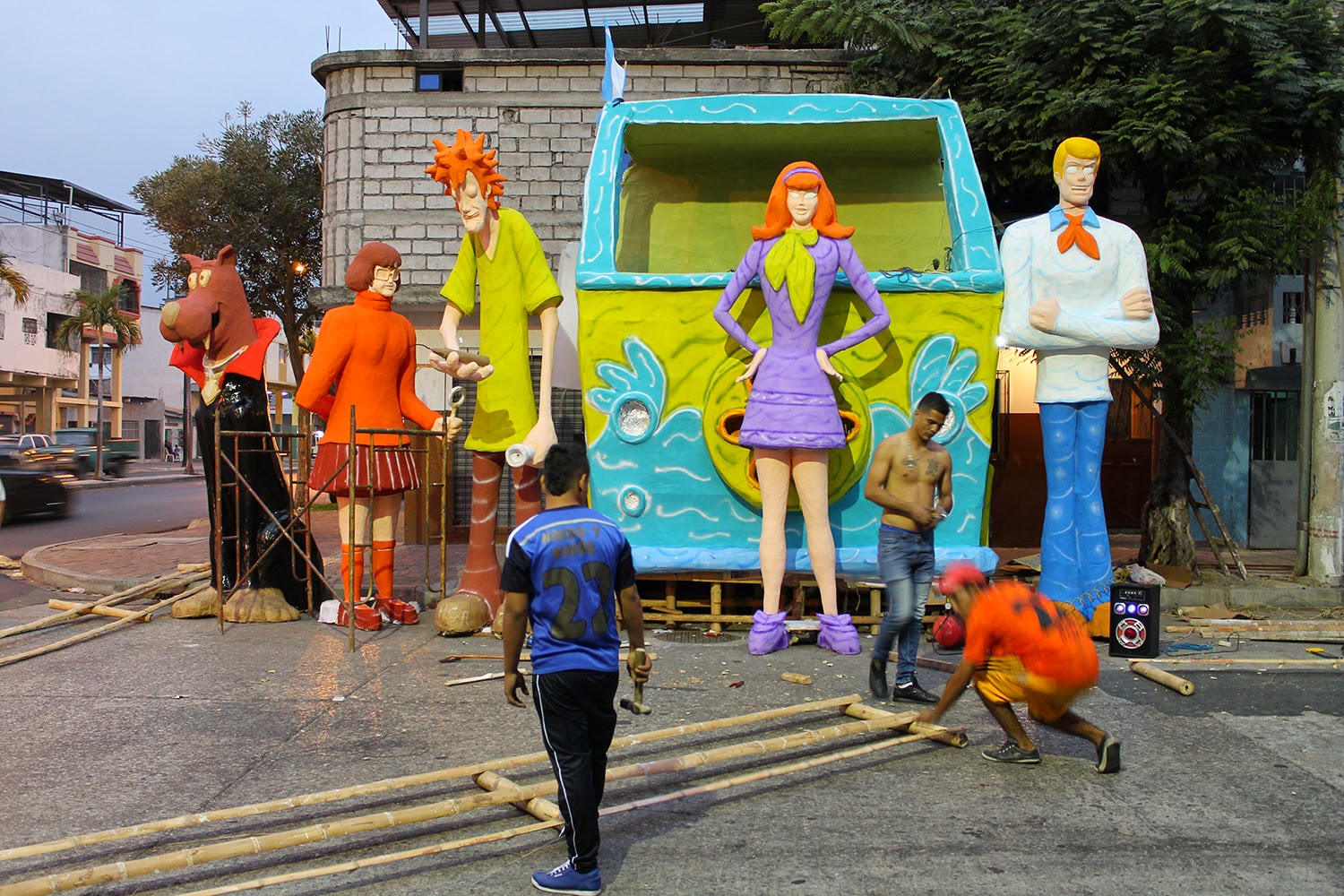 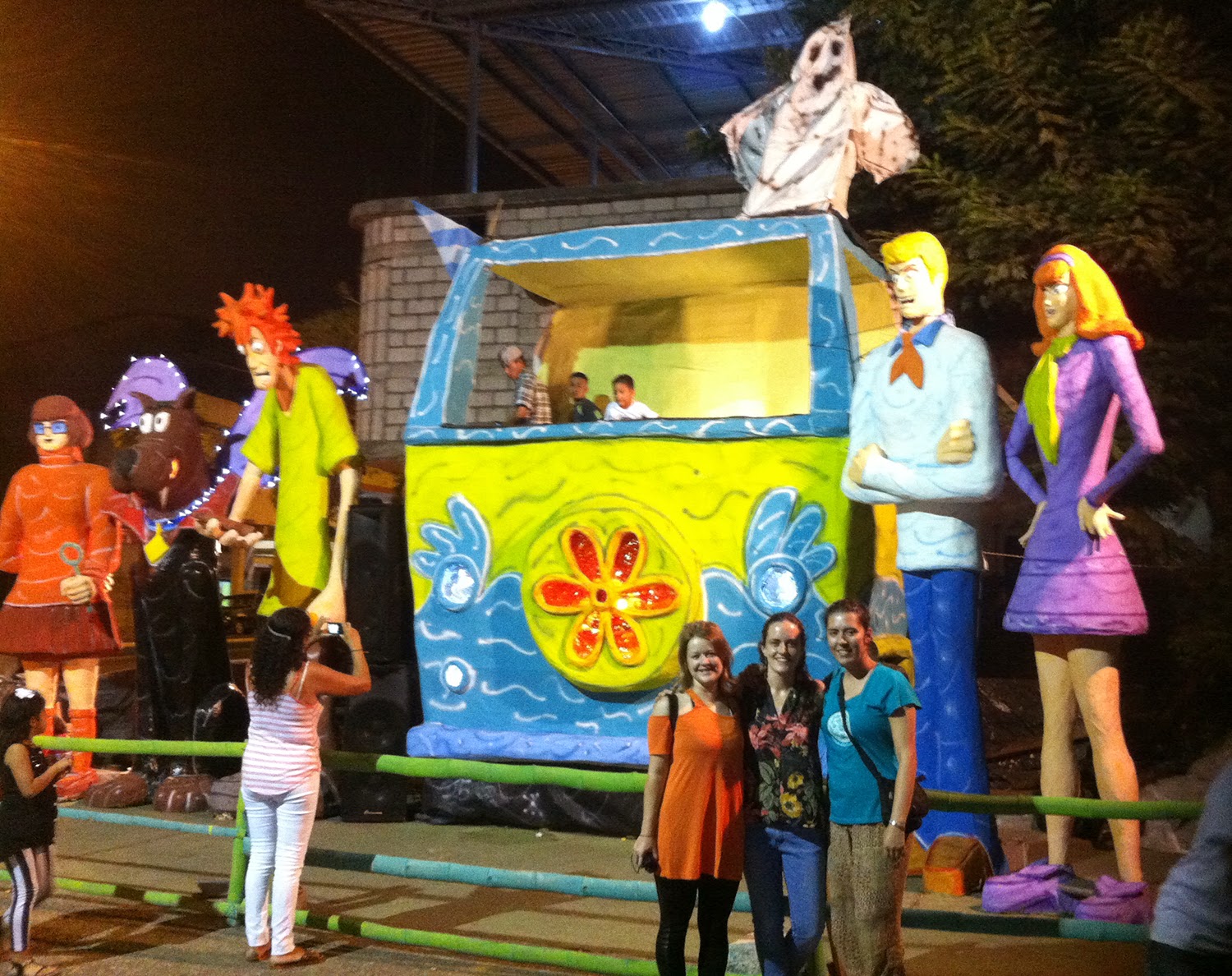 A Mario Brother's character in process, and fully painted, then being dismantled (rather than burnt) on Sunday morning.  The fire brigde need to be present at the burning of each giant 'monigote', so perhaps there were so many this year that they just never got around to this guy! 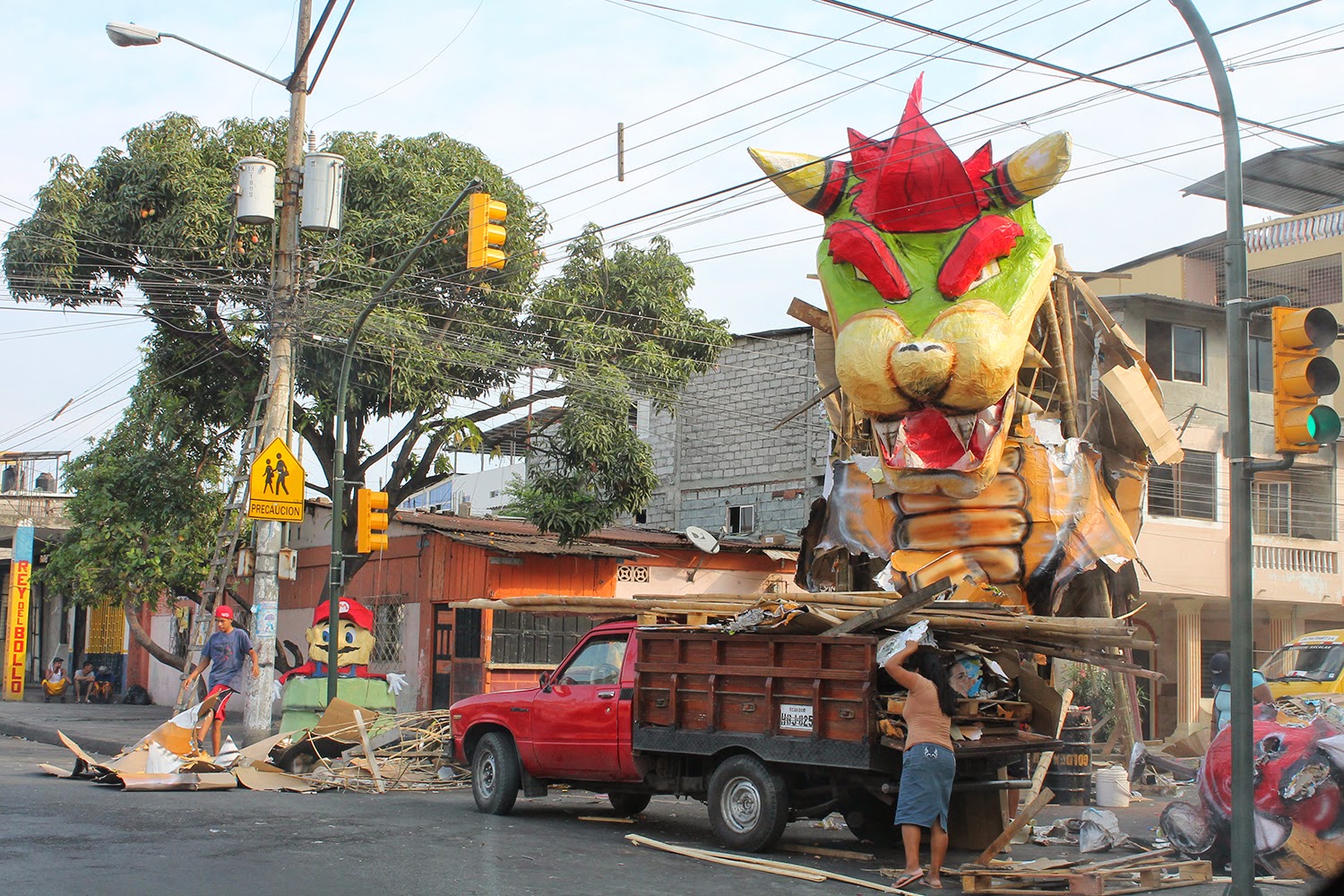