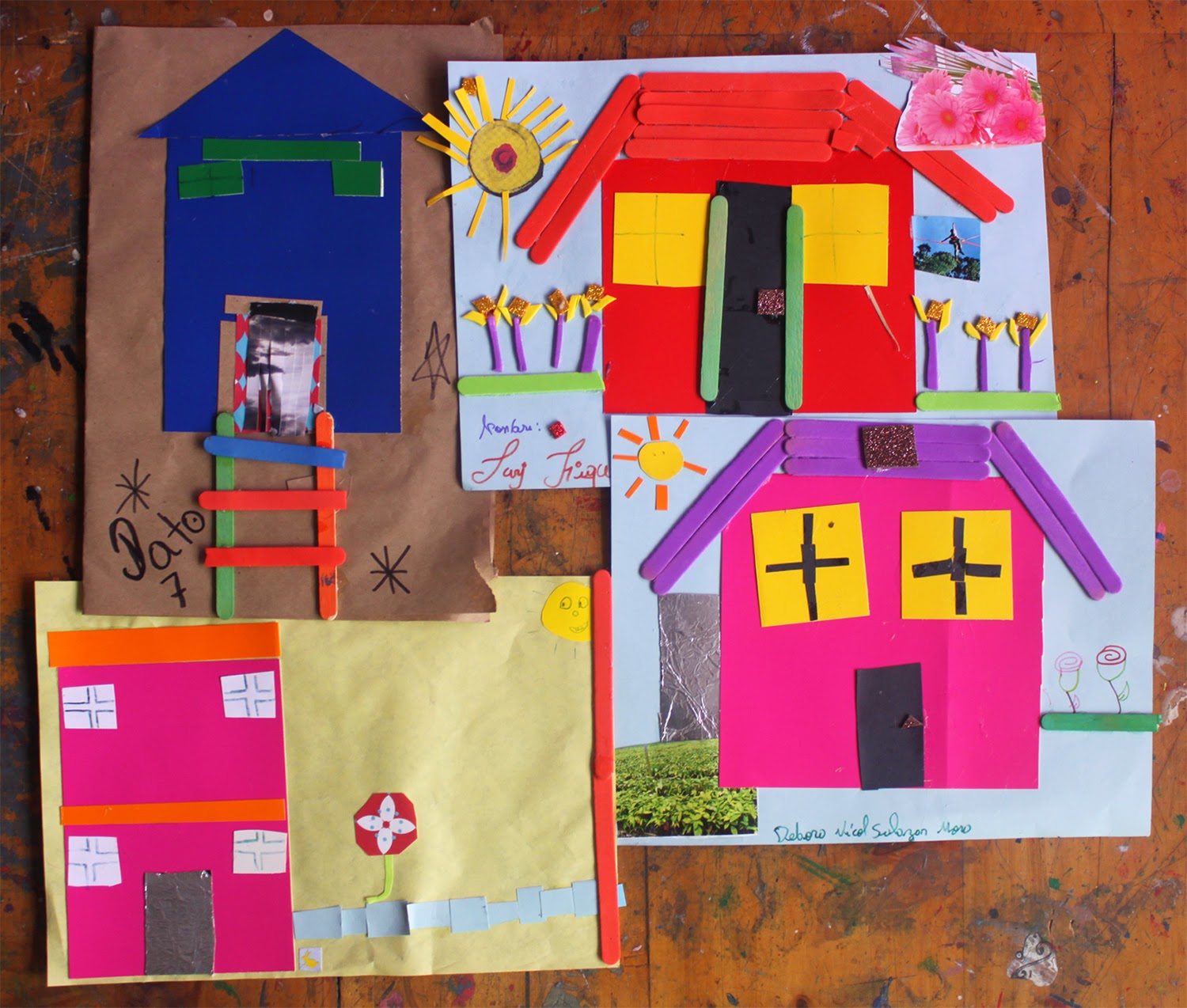 IDEA AND AIMS:  To open our new year and new project by looking at something close to the children's hearts, their own houses.  What do they look like outside and inside, where do the children feel happiest? 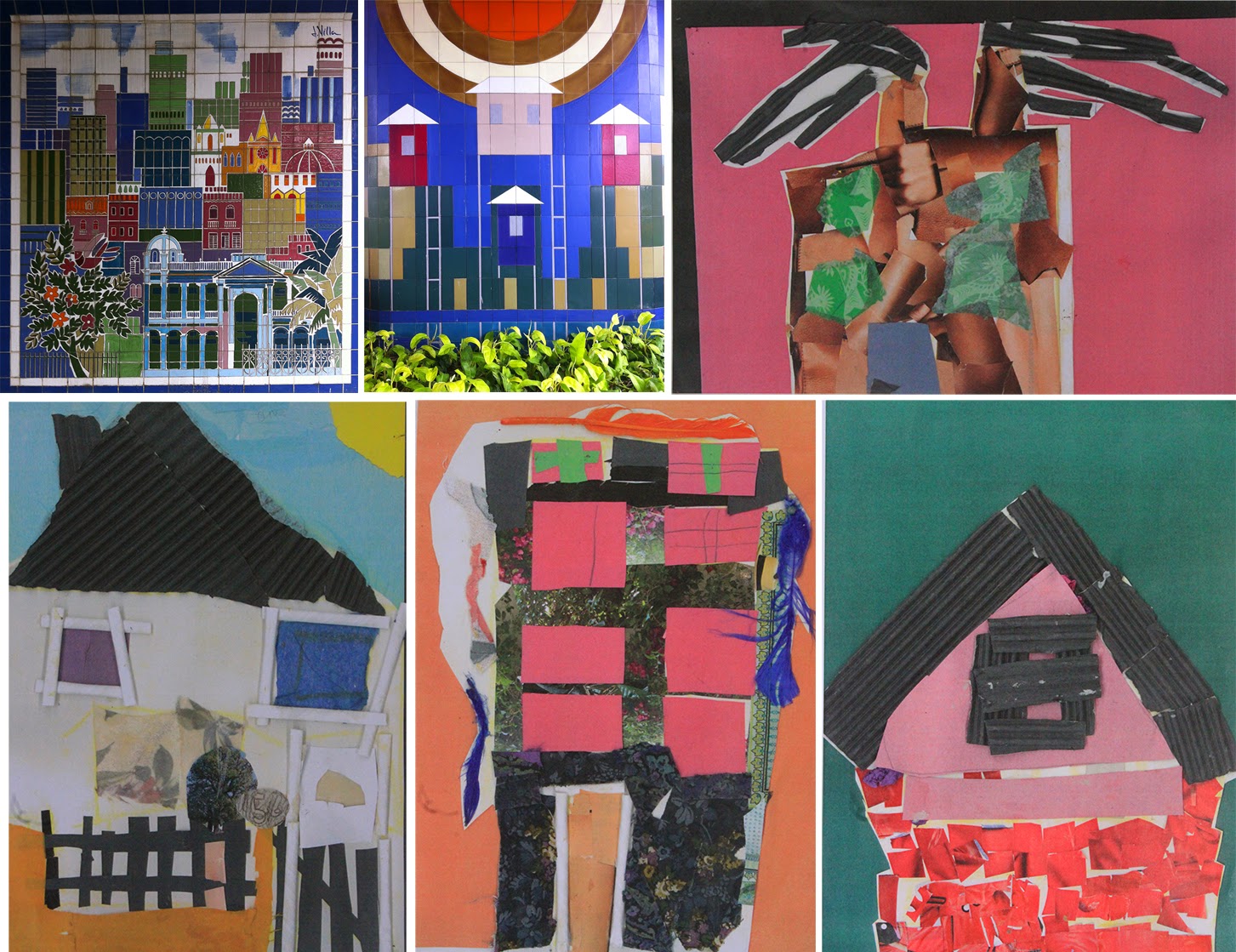 (Top left and middle) Reference of mosaic buildings represented on the underside of bridges here in Guayaquil.  (Top right and bottom row) the collaged houses from Emily's pupils in London, many of whom are originally from other countries, signs of this show through in the textures they chose to use, whilst the form of the London homes is clear. 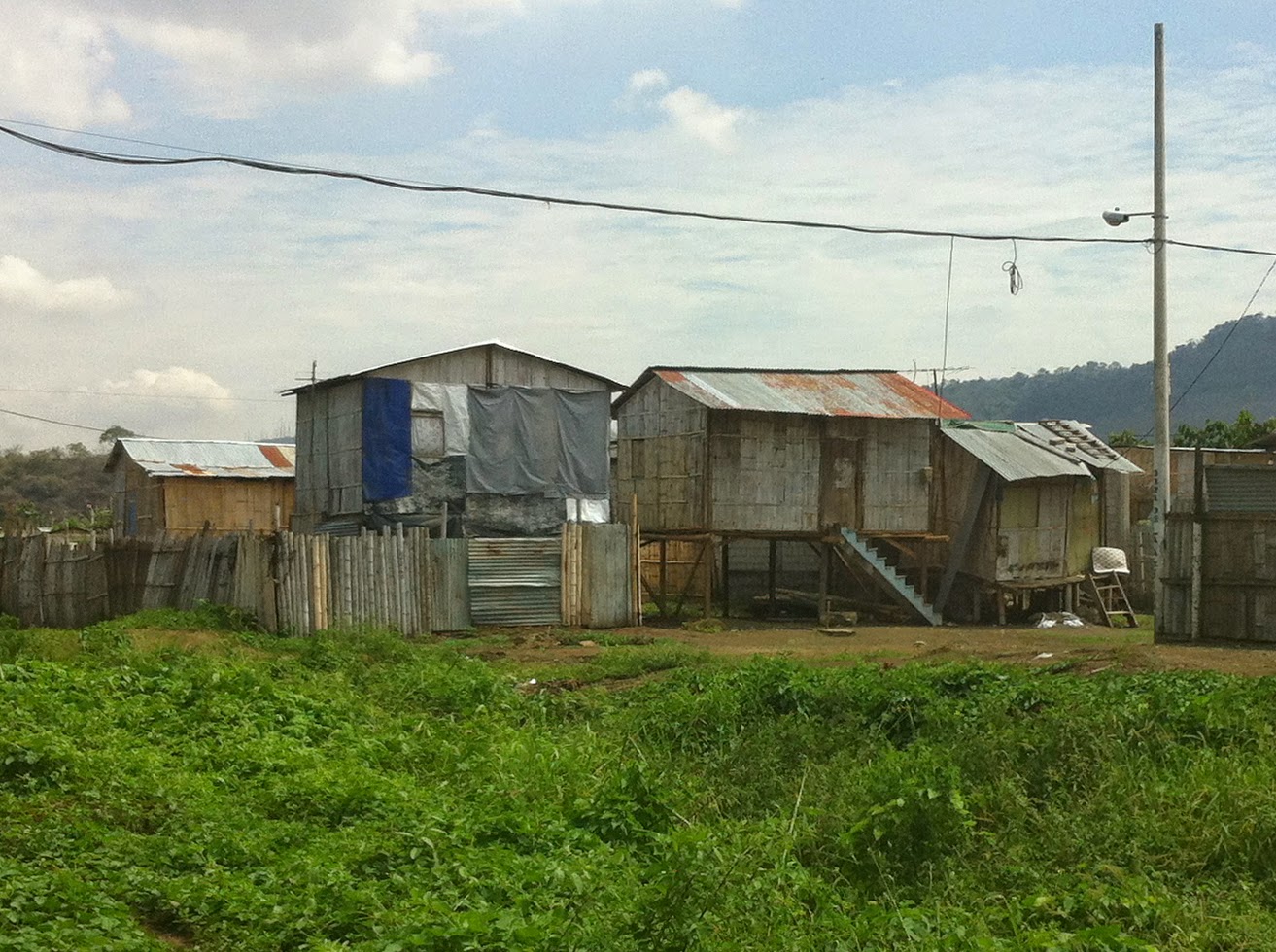 Cane houses in Sergio Toral, this style of house is typical of the coastal countryside, as it is said to be really cool inside.  It is common to see this type of housing in the sectors refered to as 'invasiones', meaning that the homes have been built without permission.  They are typically built up on four cane legs and in those I have been inside are divided into one or two rooms. 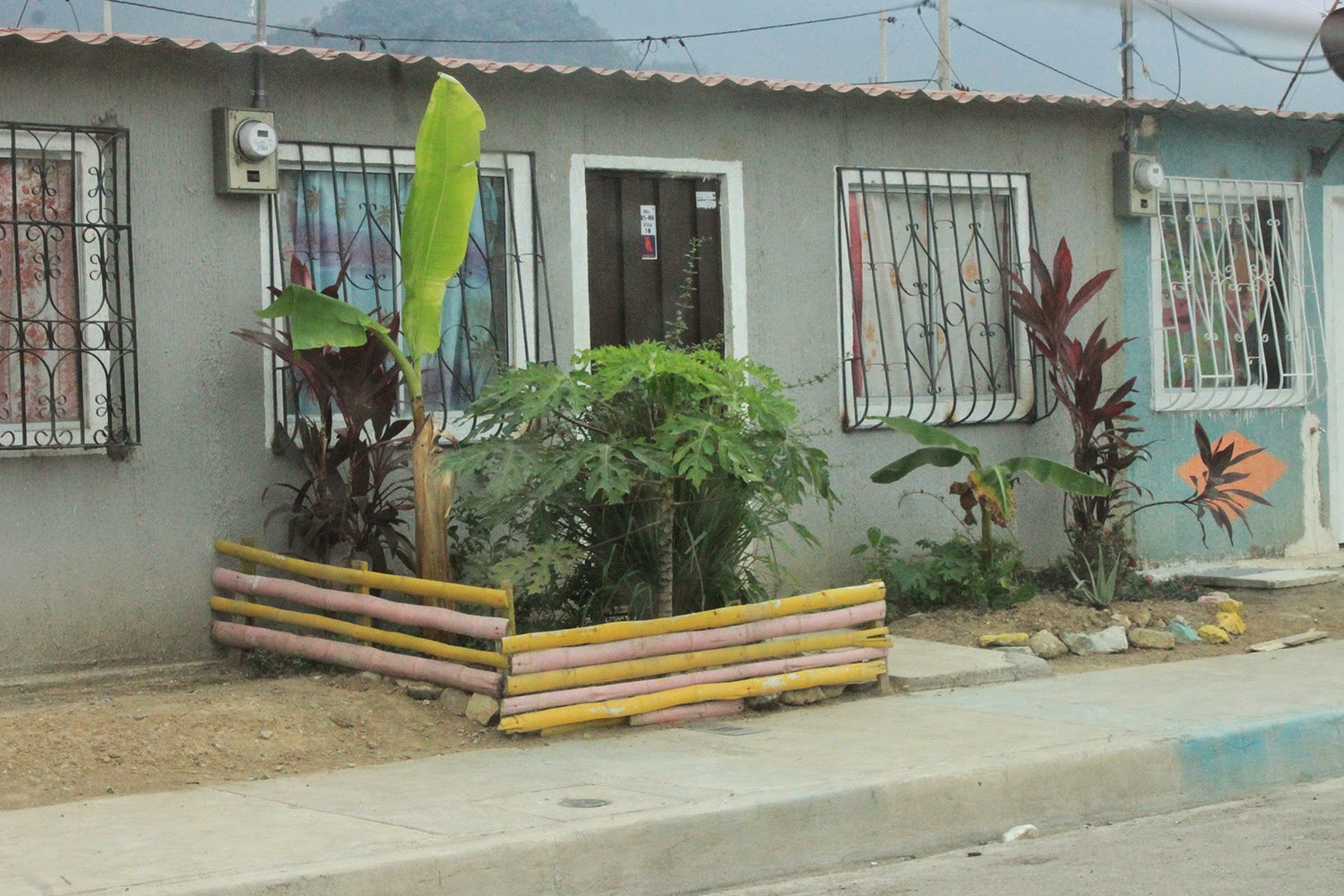 (Above and below)  Houses in Socio Vivienda 1 and 2 are made from cement.  The name of these neighbourhoods translates as "Social Housing", as these are government built houses that are identical in size and layout, until families move in and paint them, add extensions, set up small businesses and plant flowers and trees. 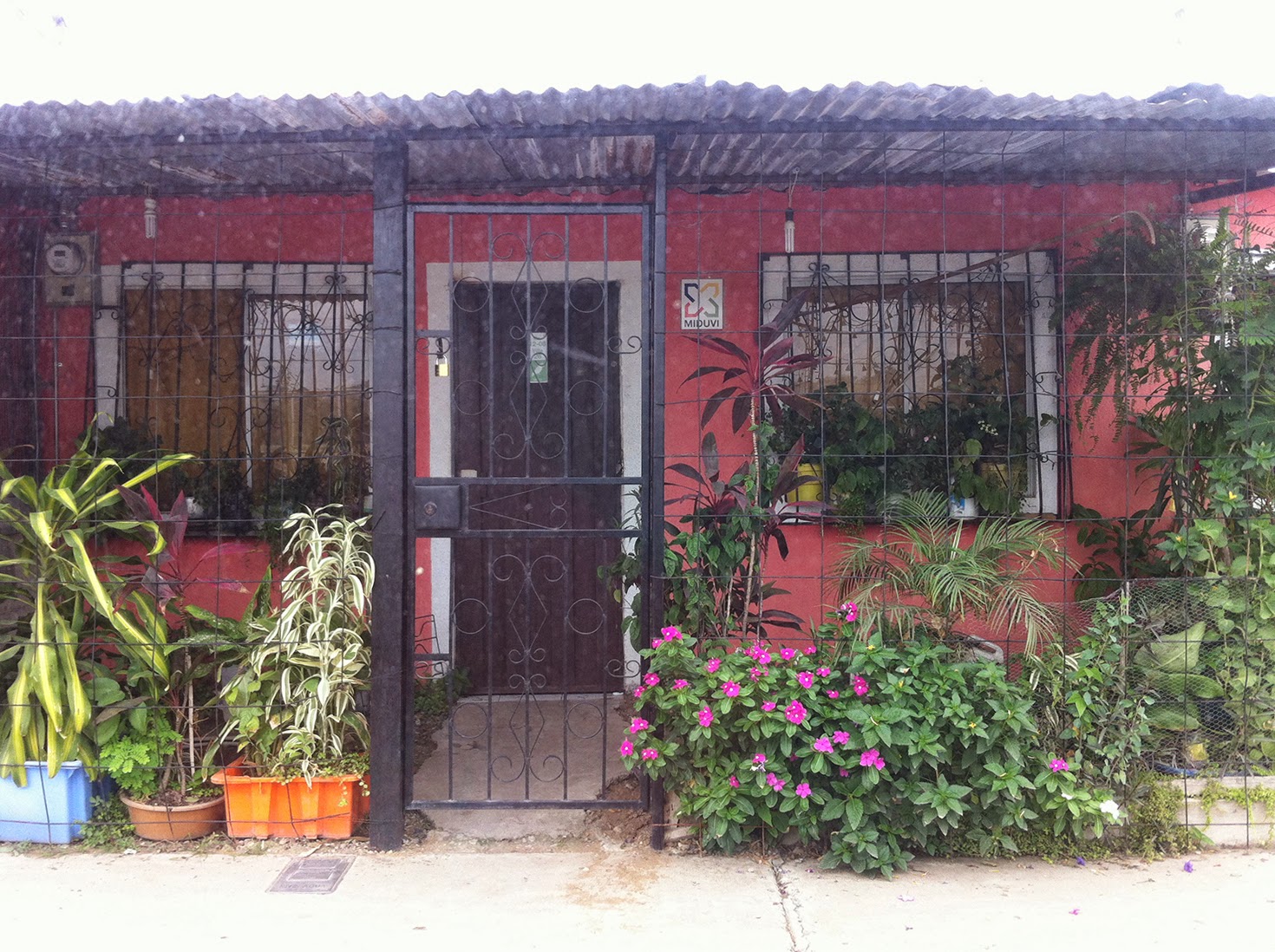 Taking the typical Guayaquileñan houses as reference, Emily and I made collage examples and displayed them alongsife the English houses on this poster.  We asked the kids could they identify which were which.  Can you? 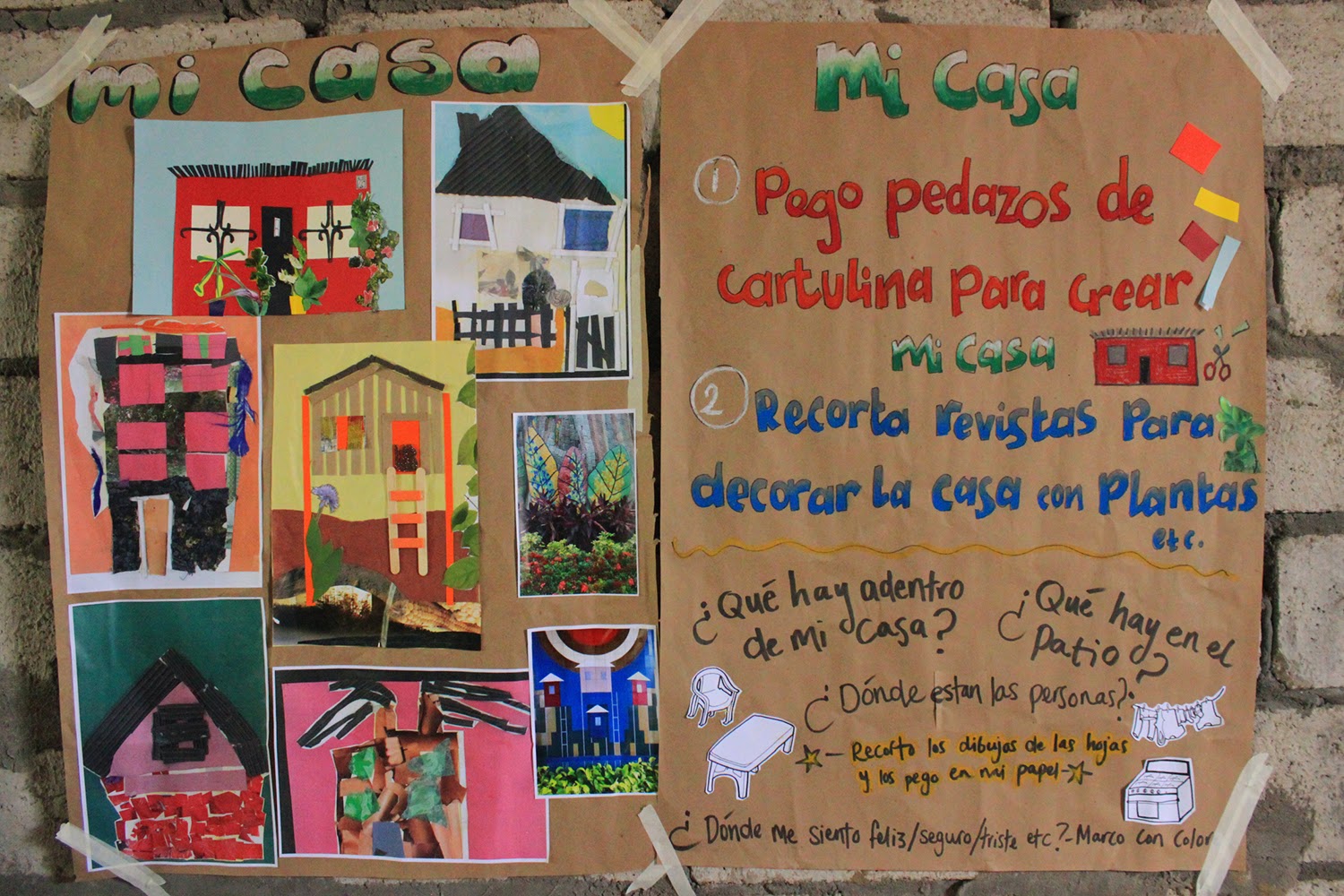 PROCESS:
1. Facilitators pre-cut colourful card into various shapes and sized to be used as mosaic pieces.
2. Children: Create the outside of their house on a coloured A4 piece of paper, using colourful card, colourful lolly pop sticks and magazine images.
3. Children that finish quickly: In Sergio Toral the children took another sheet of paper and picked and chose from photocopies of drawings of furniture and people (that Emily drew) to create a representation of the inside of their house and their patio and the people that live there, marking where they feel most happy.  In Nueva and Socio Vivienda we decided to give the children more time on the fronts of their houses and to reduce this second step to something simpler, asking them to turn their house over and draw with marker pens a picture of themself where they feel happiest. 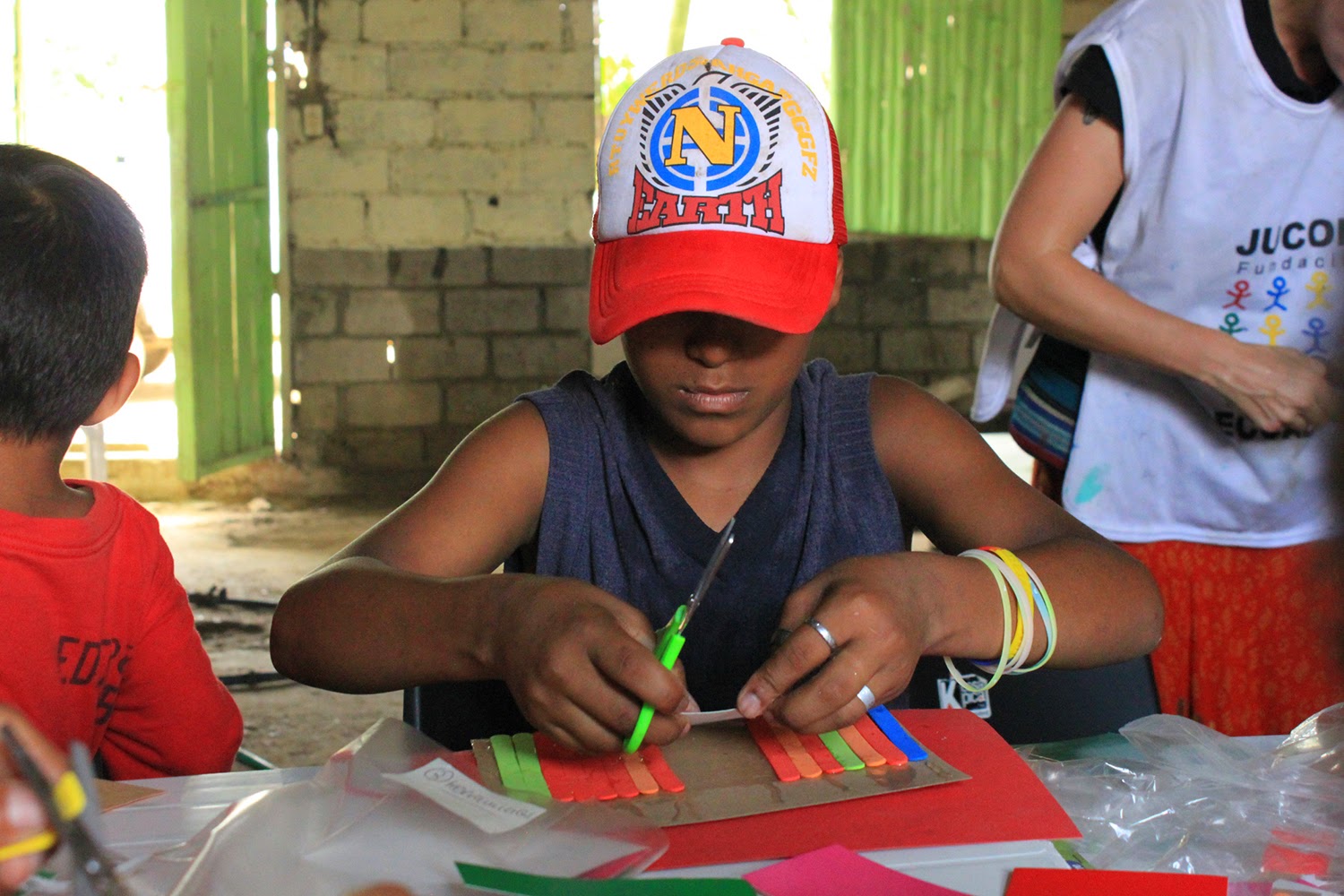 (Above and below) working away on their houses in Sergio Toral

The children's houses coming together in Nueva Prosperina: 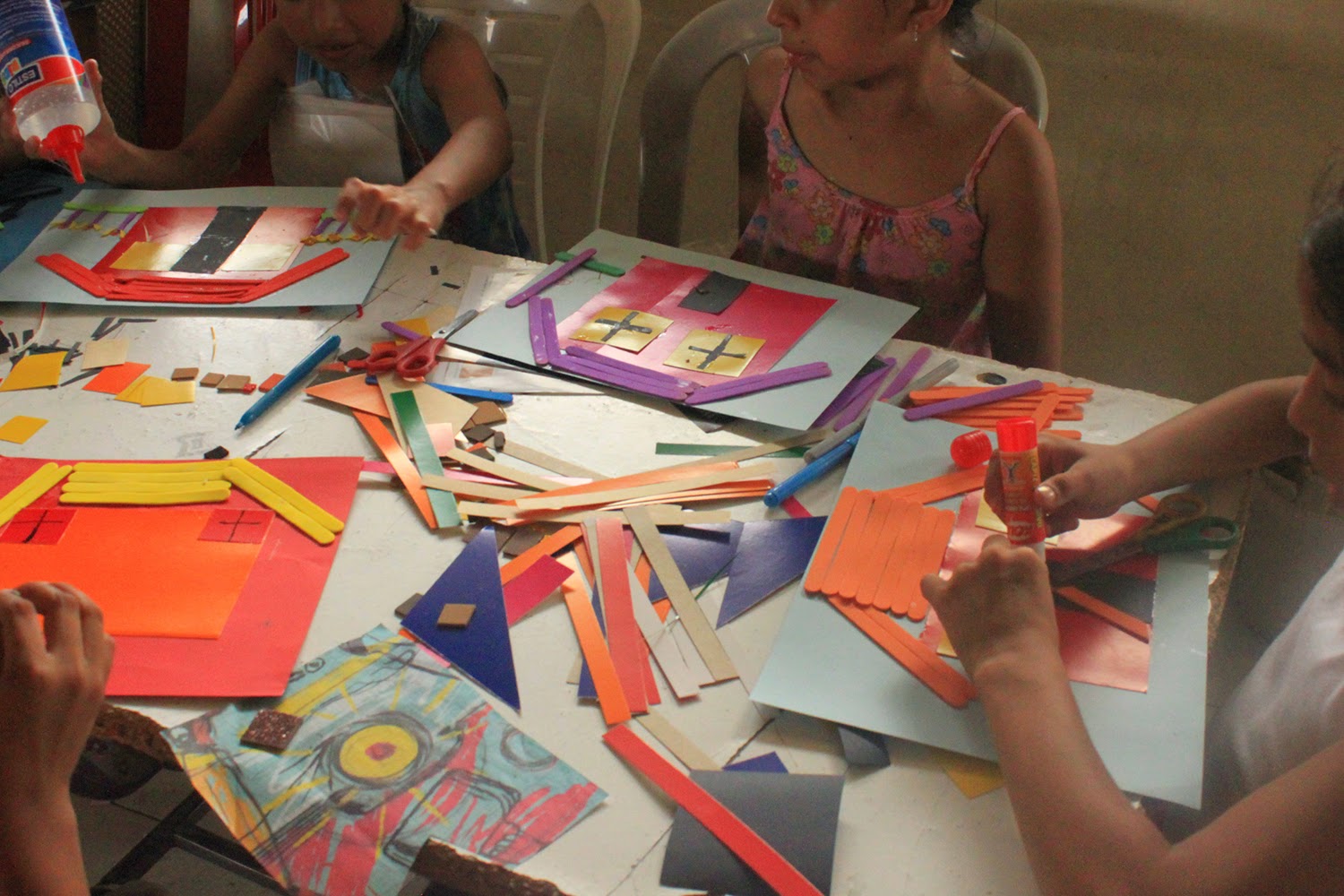 TAKE A LOOK AT THE FINAL RESULTS OF THE KIDS HOUSES: 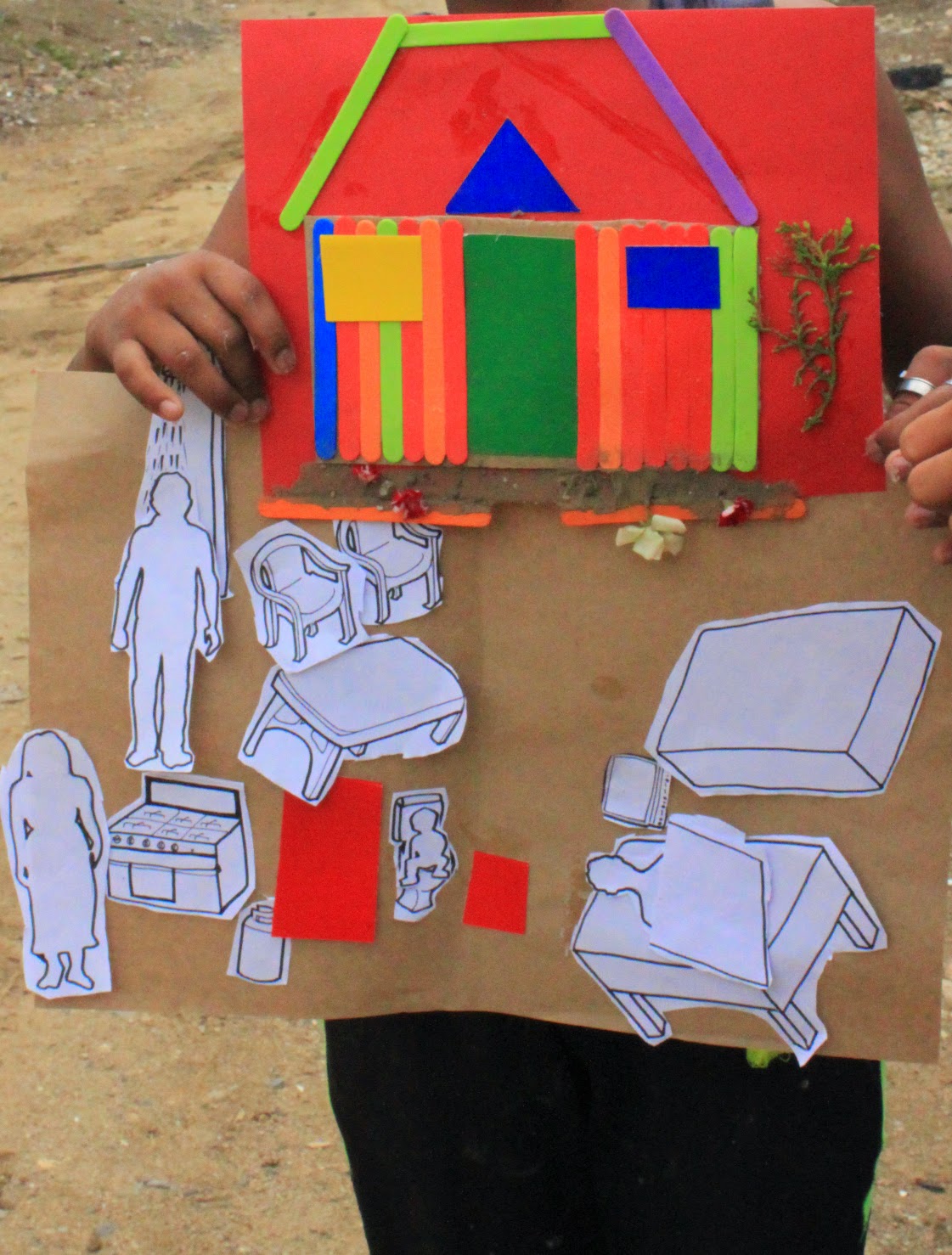 Many of the children in Sergio Toral were very imaginative, collecting earth, pebbles and flowers from the street to include in their designs. 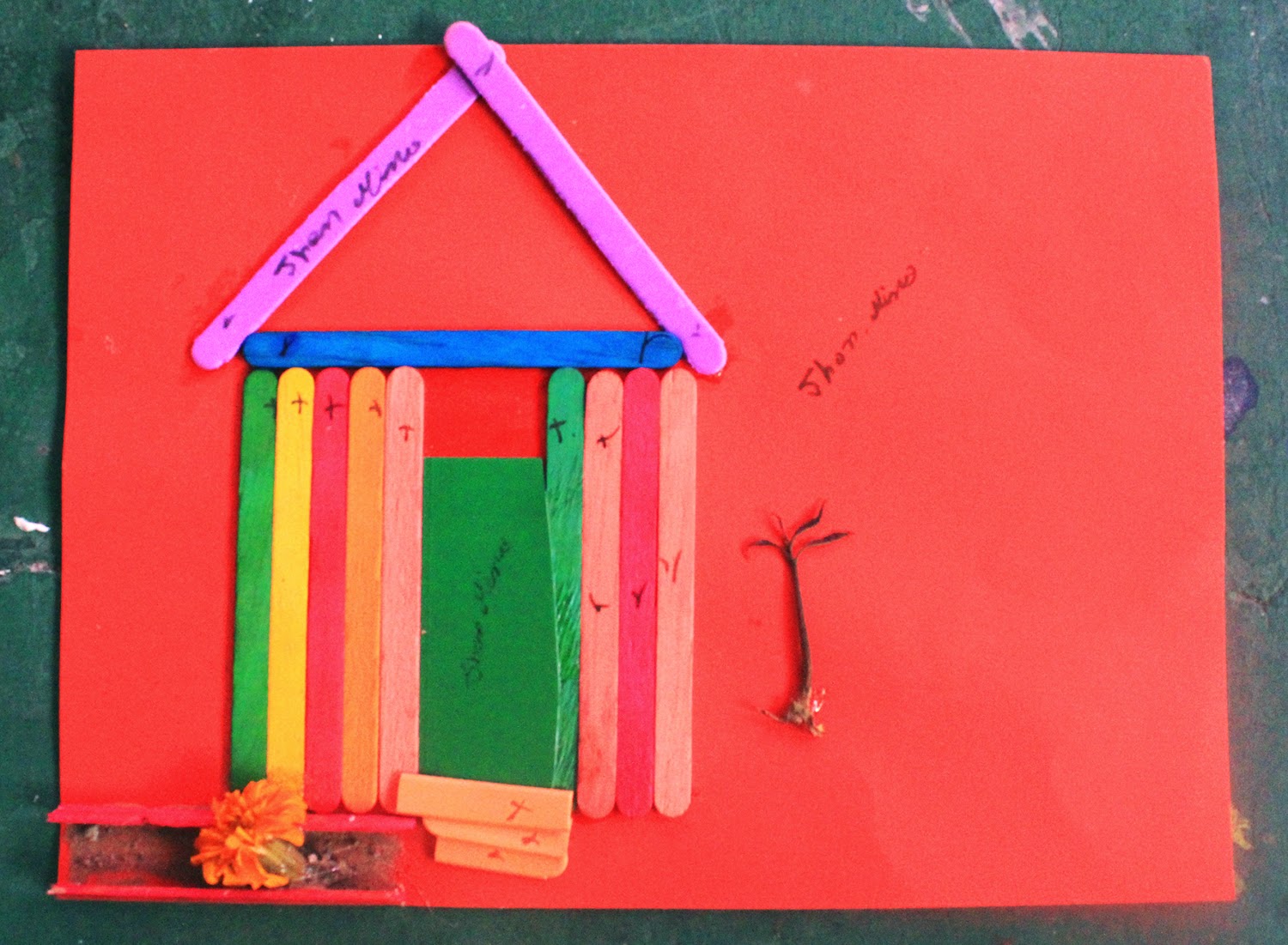 When asked where they felt happiest many replied, "In my bed"!  One child said "Watching TV" 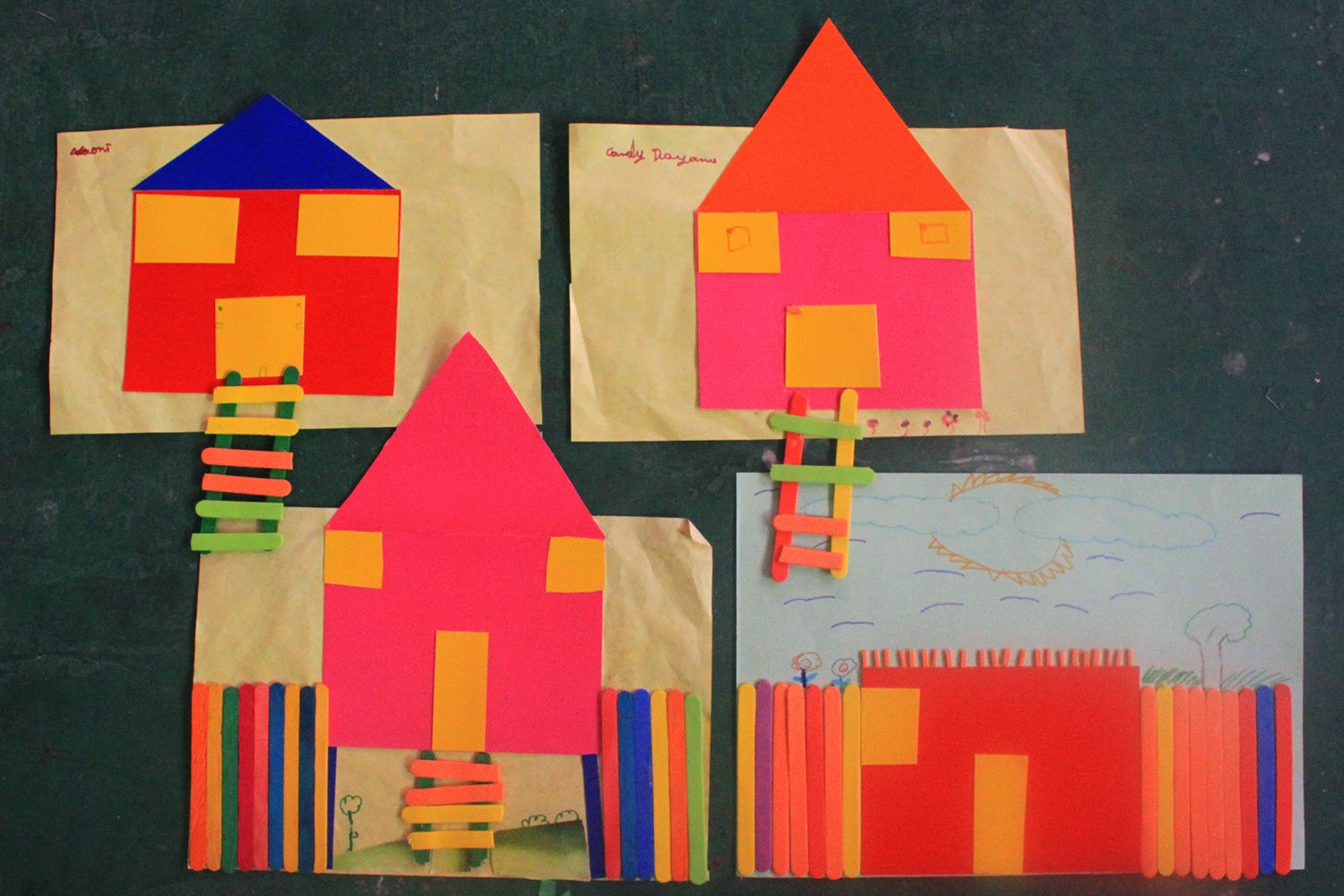 As we have so many siblings in our groups it was fascinating to compare their different representations of the same house.  The image above shows houses made by four sisters, (clockwise from top left)Naomi, Candy, Genesis and Briggite. 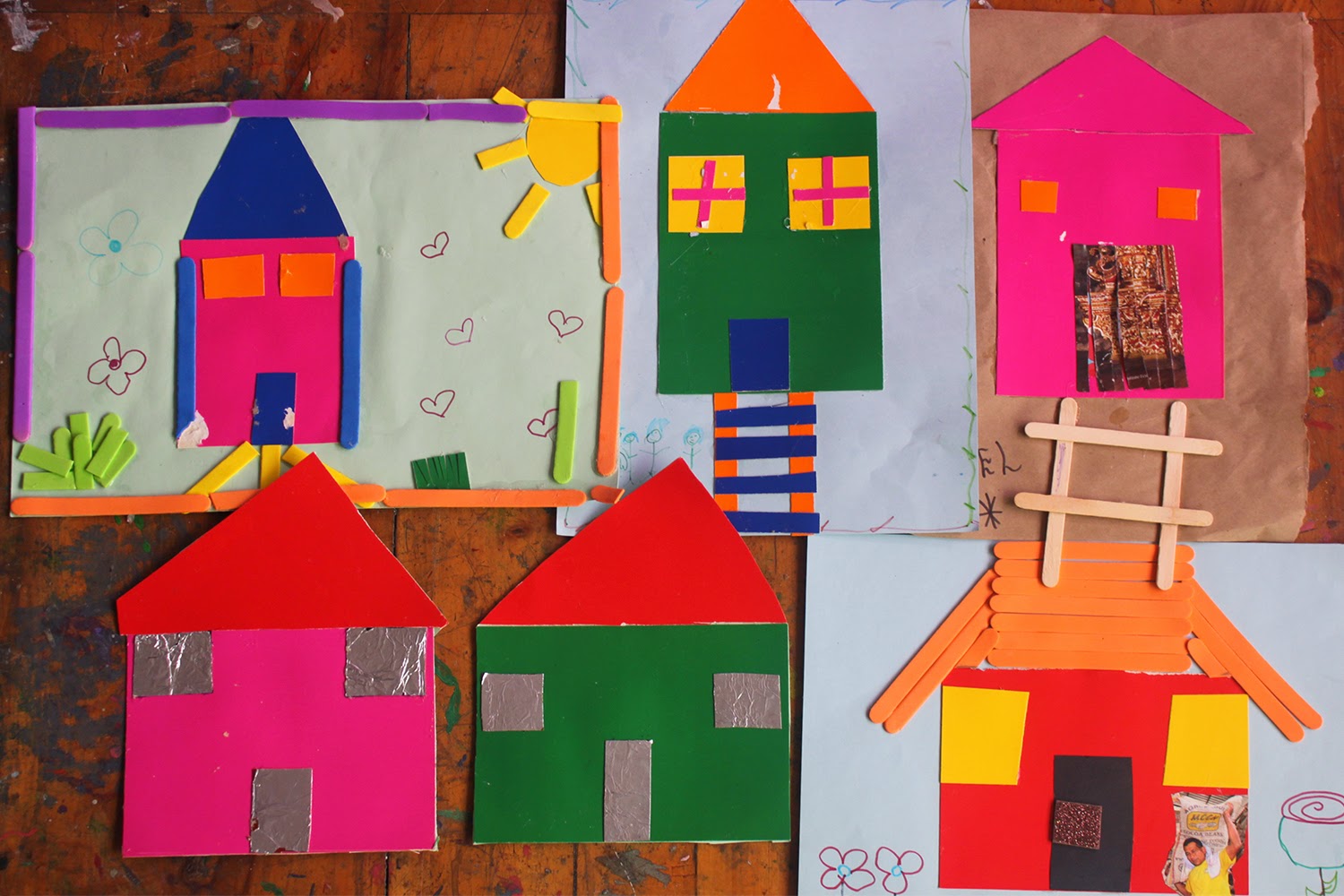 (Above and below) The children's houses reflect the mixture of can and cement housing in Nueva Prosperina. On the reverse the children said they felt happiest in their rooms, on the computer, in the cyber café, with their families and friends. 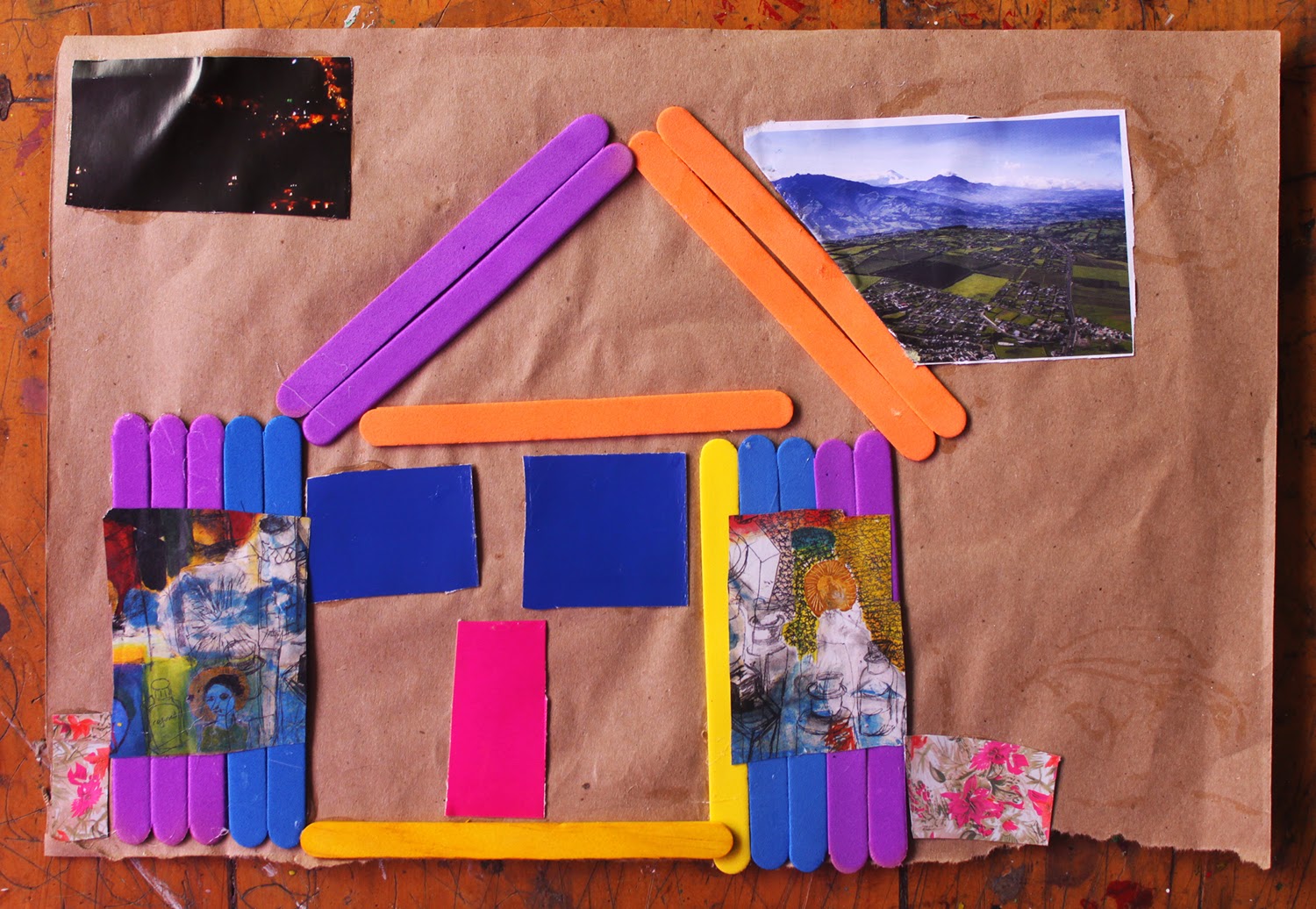 We were luck to have JUCONI orientador Uri supporting is in our morning group in Socio Vivienda because when talking to her about the activity in the car on the way in she commented on how for the children in Socio Vivienda it would be interesting to think about which house they want to represent, where they lived in the south of Guayaquil before moving to SV, or their current home.  This led to us opening the session by talking with the kids about where ther lived before and what their homes were like. 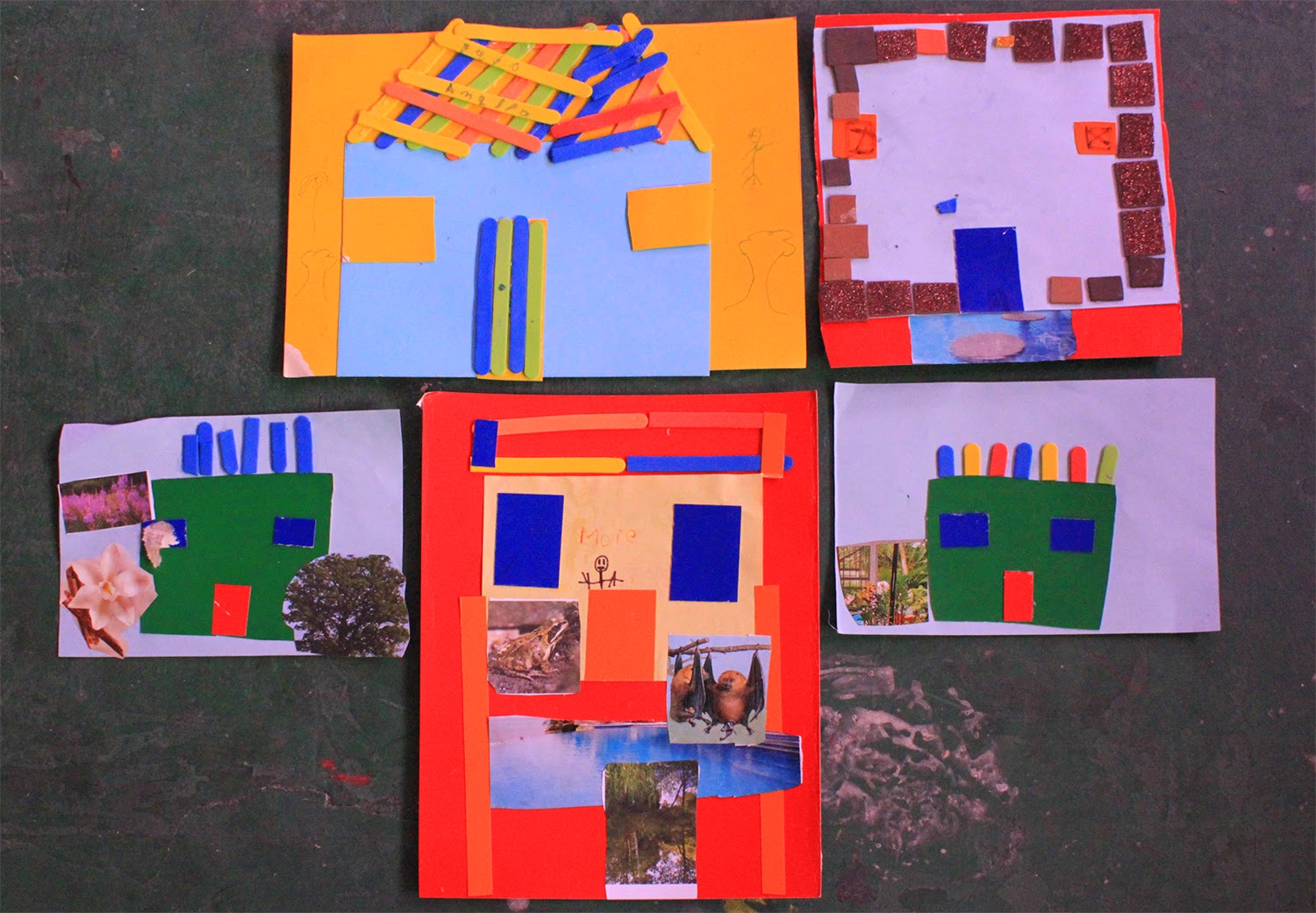 Many of the children lived in cane houses over the edge of the estuary before they moved to Socio Vivienda.  In these homes they would swim regularly in the estuary.   You can see this reference in some of the designs above that include water and fish. 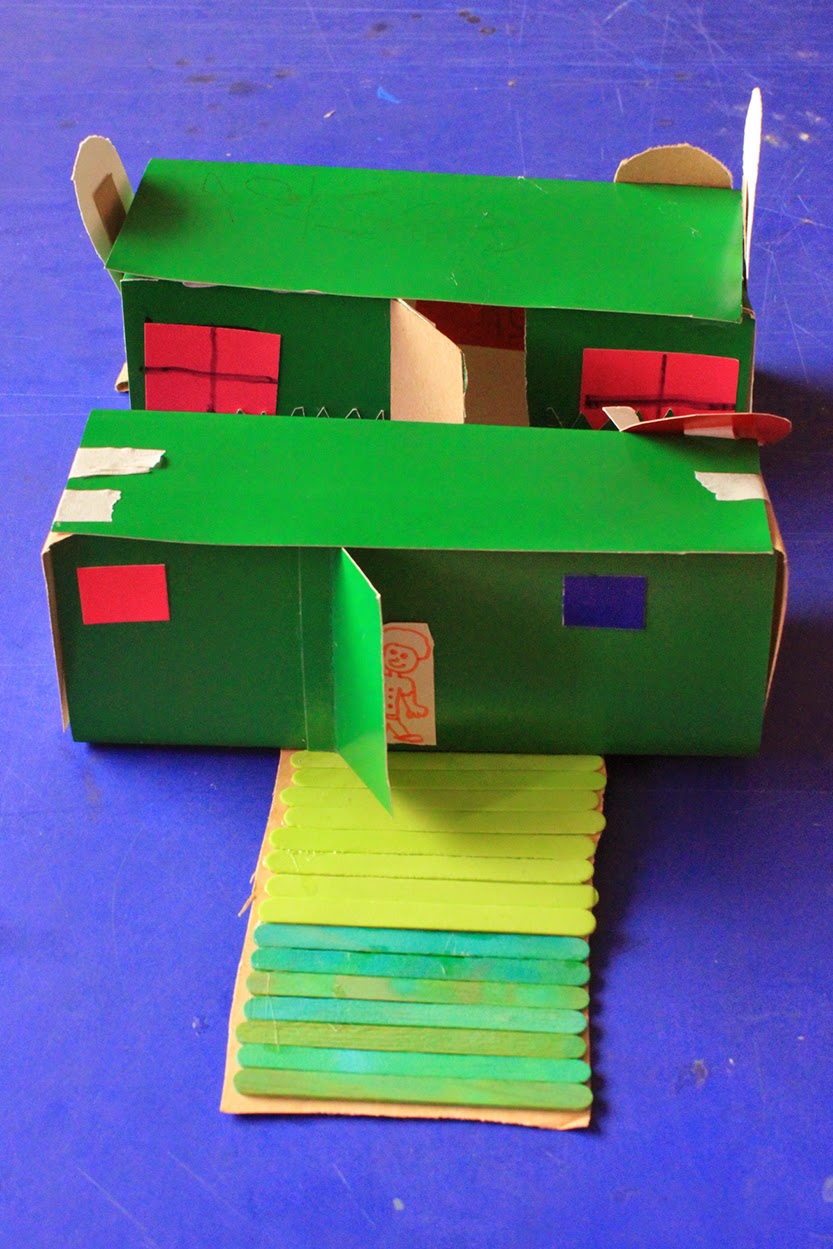 Some of the children were inspired to make 3D houses that represent very closely the style of the housing in Socio Vivineda: 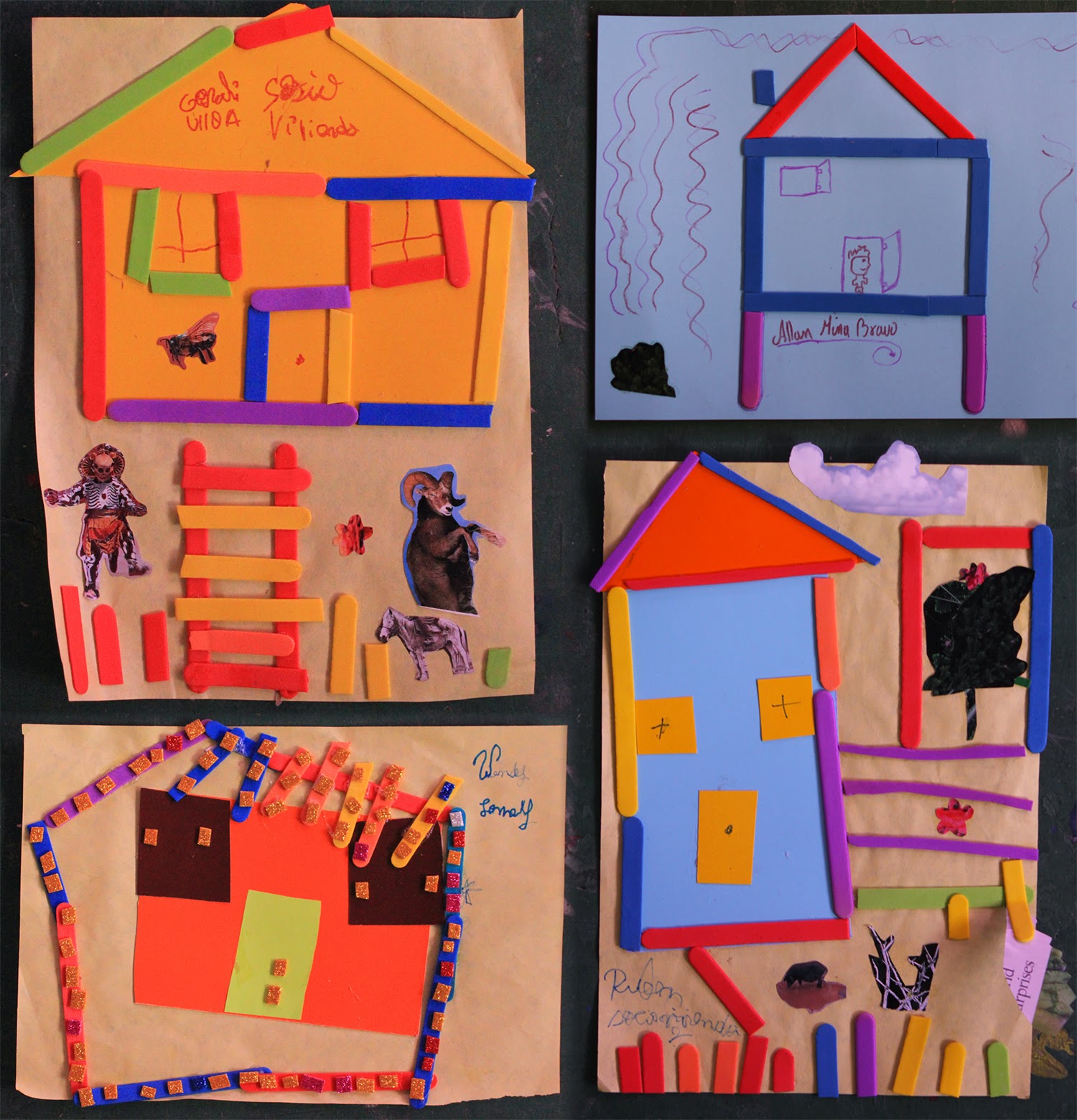 More signs of their previous cane homes in the south (above) and our most expressive house from 4-year-old Jean Pierre below. 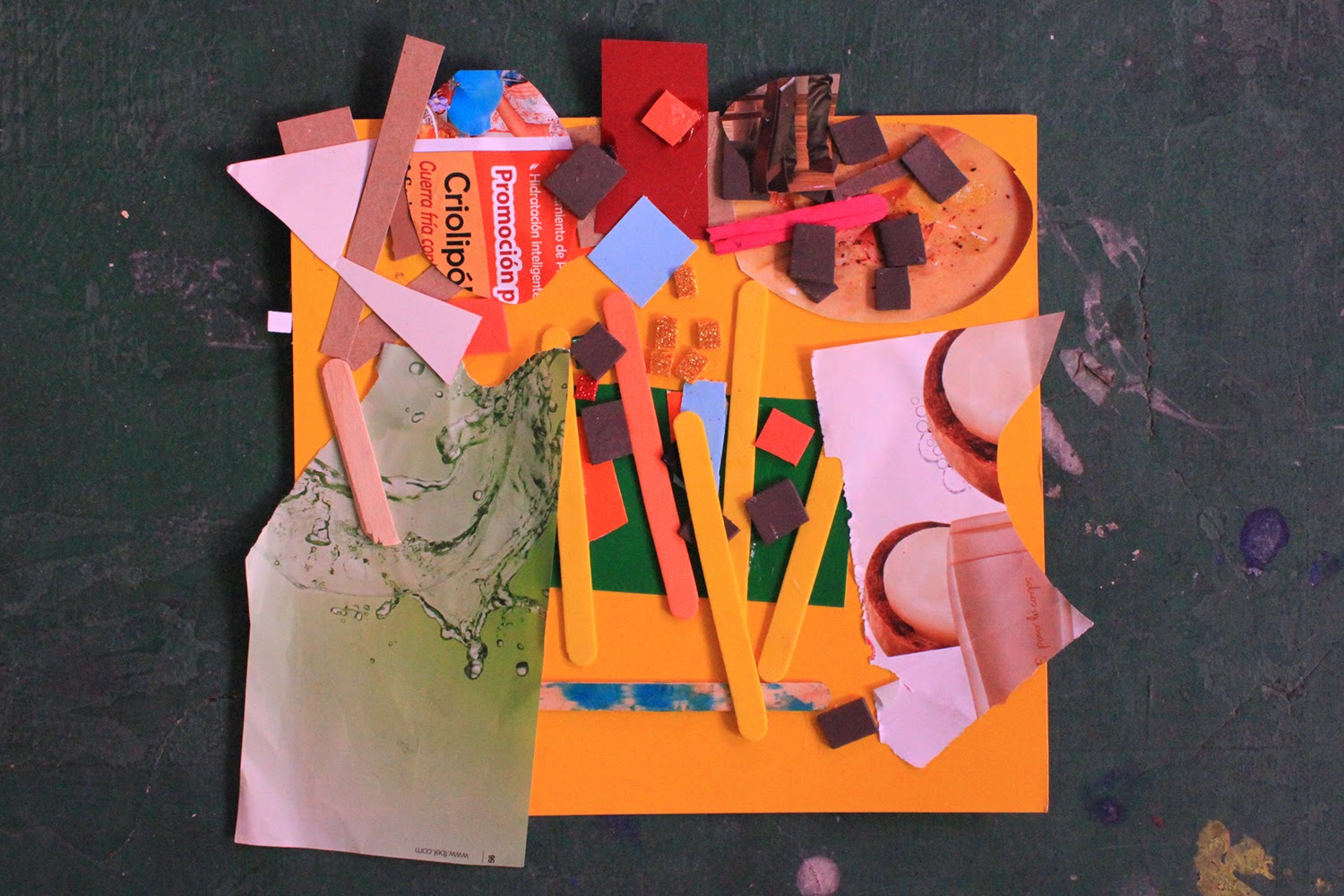 Plus some more 3D houses below. Our Socio Vivienda children's houses were perhaps even more original than in the other two groups because of the mixing of materials by the time we ran the workshop with them.  Having to search more to find what they wanted to work with the designs seem more creative overall.  When asked where they felt happiest some children siad their rooms, their beds, on the computer, watching TV. 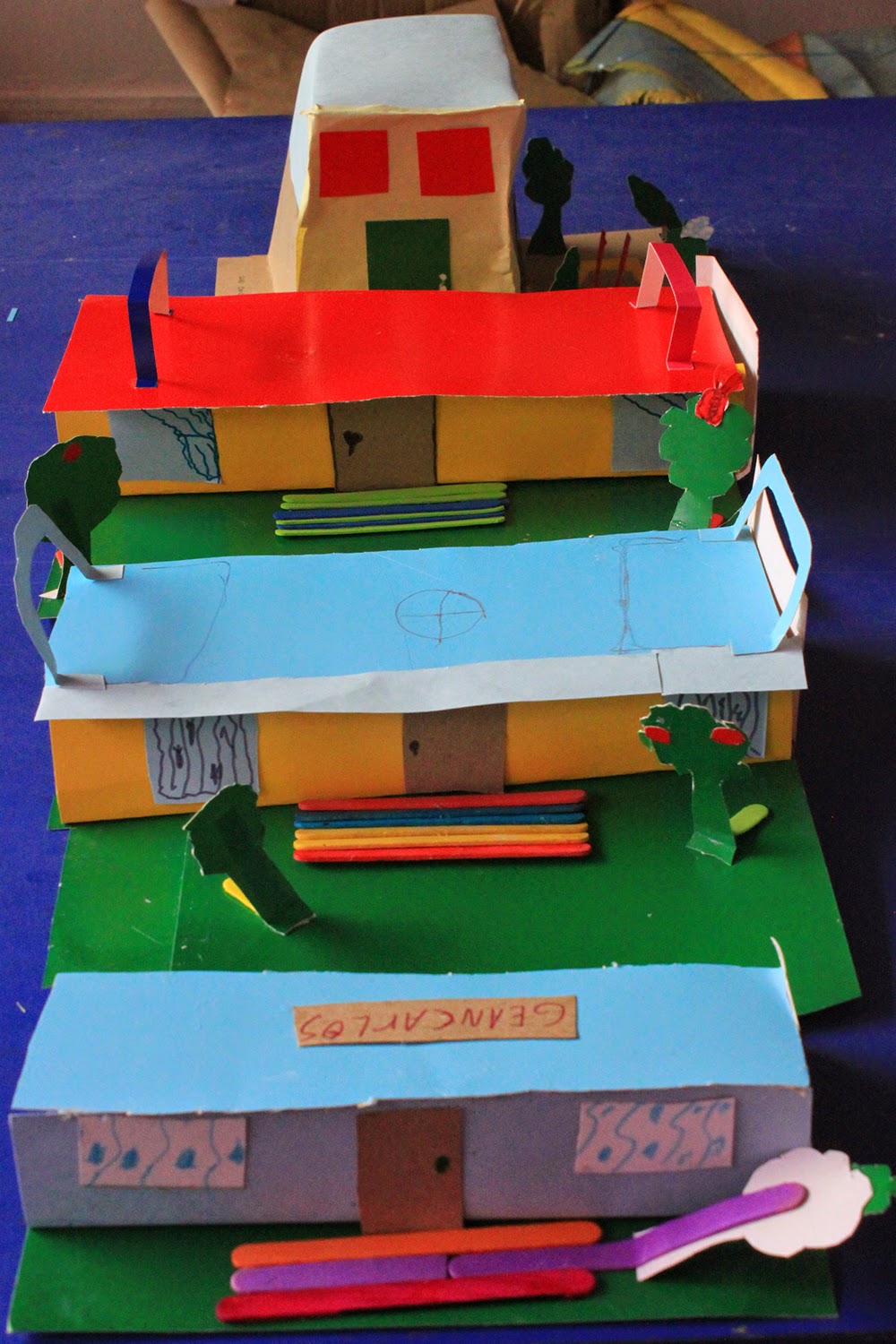